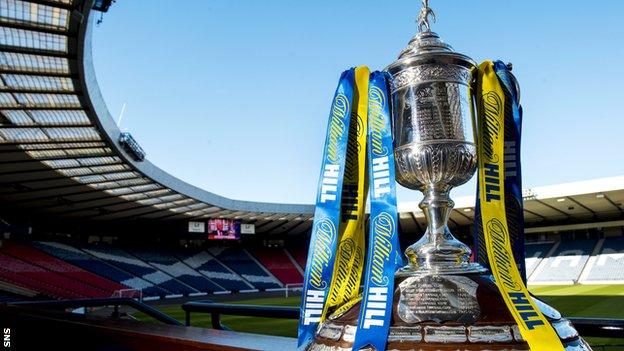 Annan Athletic will host Premiership side Hamilton Academical in the fourth round of the Scottish Cup after they beat Inverurie Locos in a replay.

Peter Weatherston's goal just before half-time was enough to settle the tie after they had drawn 4-4 in the original tie.

On Monday, Cowdenbeath set up a clash with Rangers at Ibrox after a 4-2 win over Arbroath.

Greig Spence and Liam Gallaghan's early goals were added to by a Dean Brett double before the break.

Bobby Linn scored a double either side of half-time for the hosts but it was not enough.

Lothian Thistle Hutchison Vale will meet East Kilbride FC after a 3-0 win over Huntly on Monday.

The tie between Wick Academy and Linlithgow Rose was postponed for a fourth time, with a new date of Monday, 14 December scheduled.

Dumbarton v Queen of the South