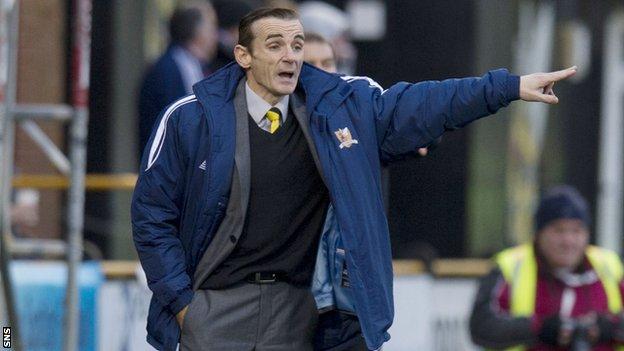 Danny Lennon has resigned as manager of Alloa Athletic after picking up just five points from 16 games in the Scottish Championship.

The former St Mirren manager took charge of the Wasps in April and helped them avoid relegation.

"I'm the first to hold my hands up and say that our run of results this season has not been good enough." said Lennon.

Former Dundee United striker Paddy Connelly has been placed in temporary charge of the first team.

Lennon also previously managed Cowdenbeath and had a short spell as Scotland under-21 coach.

"A number of factors have contributed to this, but I take full responsibility," Lennon told the Alloa club website.

"I have had an open and honest discussion with the chairman on it.

"Sometimes freshening things up can be the catalyst to turn a season around. I have great respect for the chairman and everyone associated with this great wee club.

"I would like to give the club time to find someone else before the transfer window opens up in January and provide a new manager with the opportunity to influence any personnel changes they see fit for the second half of the season."

Lennon's final game in charge was on Saturday where they lost 2-0 to Dumbarton in the Championship. They face the Sons again away from home on Tuesday evening in the Scottish Cup third round.