Olivier Giroud scored his first hat-trick for Arsenal to ensure the Gunners qualified for the last 16 of the Champions League by beating Olympiakos.

Needing to win by two clear goals, the Gunners produced a performance of nerve and nous to finish second in Group F.

Giroud headed the opener in the first half, then stroked home the second after good work by Joel Campbell.

The French striker put Arsenal's qualification beyond doubt with his third from the penalty spot.

Listen to 5 live commentary on the goals

Who's in the Champions League last-16?

'It's Houdini Wenger this evening' 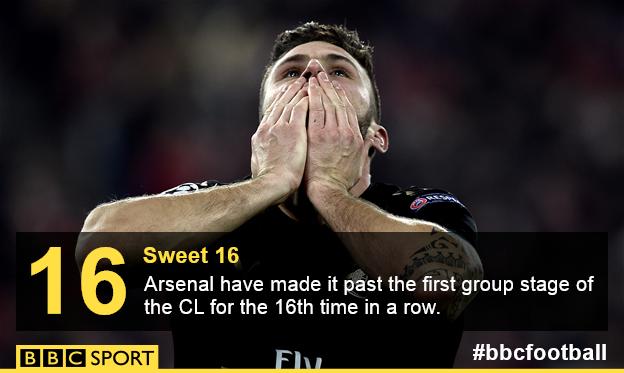 Arsenal have never failed to reach the knockout stages of the Champions League since the start of the new format in 2003-04, and their experience on the biggest stage shone through on a memorable night in Athens.

They weathered the early enthusiasm from the physical home side, who were backed by typically partisan support, and slowly seized the initiative with a composed performance.

Mathieu Flamini had already hit the bar before Giroud opened the scoring with a near-post header from Aaron Ramsey's cross, which went in off the goalkeeper Roberto.

The second was the best goal of the night as Giroud won a flick-on on the halfway line and timed his run into the box to perfection before stroking home.

The third was slightly more fortuitous as Omar Elabdellaoui was penalised for handling Nacho Monreal's shot and Giroud stepped up to convert with ease.

Man of the match - Olivier Giroud

It's got to be Olivier Giroud for the way he applied the finishing touches to an accomplished team performance.

However, special mention must go to Joel Campbell who held off three defenders before taking out another two with a cute pass for Giroud's second goal.

Time and again, Campbell showed strength to hold off his marker and vision to slide in Giroud to offer hope to Arsenal fans that they have the makings of a fine strike partnership.

Gunners fans will also be cheered to see Theo Walcott starting the game, and while the England forward clearly lacked match fitness he made some clever runs and looked dangerous both out wide and when he drifted inside.

Arsenal did well just to qualify after chastening defeats by both Dinamo Zagreb (2-1 away) and Olympiakos (3-2 at home) meant they had failed to register a single point in the group after two matches.

They went on to be defeated 5-1 by group winners Bayern Munich in Germany too, after winning 2-0 against Pep Guardiola's team at home.

The fact they finished second to Bayern means they are likely to get a tougher last-16 draw than the German side.

Their potential opponents when the draw is made are Spain's Real Madrid, Atletico Madrid and Barcelona, Wolfsburg from Germany or Russian side Zenit St Petersburg.