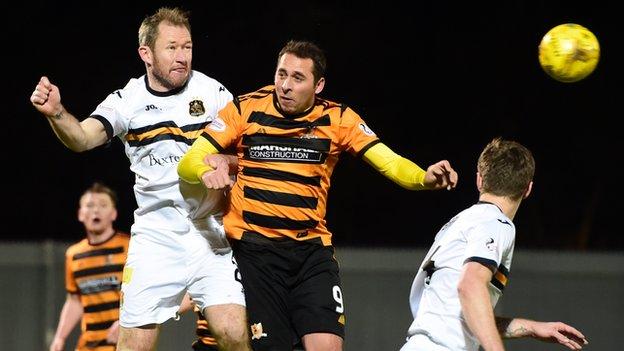 Alloa chairman Mike Mulraney says he has had "dozens" of applications for the vacant manager's role since Danny Lennon resigned on Monday.

The Wasps' striker Michael Chopra has confirmed he wants the job and will formally apply soon.

Mulraney told BBC Scotland: "There's been an enormous response already from all over the world.

"The first applications came in before midnight (on Monday), there were more before nine this morning (Tuesday)."

Mulraney revealed he received even more interest in the position during the 5-0 defeat to Dumbarton in the Scottish Cup.

"I took four applications since we came here tonight," he said. "One email, two agents and a call from a manager himself.

"We never comment on front runners or any runners at Alloa and I think it's important to keep who's in the race very quiet, because some guys who have shown interest could be with other clubs or still playing."

Mulraney added that some of the interest has been from people in "the Southern Hemisphere, Africa and Ireland".

Former Newcastle, Sunderland and Cardiff striker Chopra helped save Alloa from relegation last season and now wants to do his bit from the dug-out.

At 31, he would be the youngest boss in the Scottish Professional Football League if he was to be successful in his application.

"Yes I'm interested," Chopra told BBC Scotland. "I want to try and help the club as much as possible.

"I've worked under some good managers and learned a lot from them. I'm sure I could pass on my experience to the players I'm playing with.

"I'll speak to the chairman and take it from there.

"I know what gets said in the dressing room - I can see it and I hear it. I know what the lads want and I'm pretty sure I could do a good job."