The Euro 2016 draw takes place in Paris on Saturday, when the home nations will find out who they will meet at next summer's tournament in France.

Wales, playing at a major tournament for the first time in 58 years, and Northern Ireland, making their maiden European Championship appearance, are joined by England for the draw.

The Republic of Ireland will also feature after they qualified through the play-offs.

The tournament begins on 10 June.

A new format features 24 teams, an increase from the 16 to have competed in previous editions.

But how does the draw work? Who will the home nations face? And what will they need to do to reach the knockout stages?

How will the draw work?

Teams have been divided into four pots based on performances in qualifying and tournament play for Euro 2012, the 2014 World Cup and Euro 2016.

Each pot has six teams, though only five will be drawn from Pot 1 as hosts France have already been placed into Group A.

The top seeds, including England, are in Pot 1, while the lowest-rated teams based on Uefa's criteria are in Pot 4 - this includes Wales, Northern Ireland and Republic of Ireland.

One team is drawn from each pot to make up a group of four, so by the end of the draw there will be six groups of four teams.

How do you qualify from a group?

Good news - more teams progress from the group stages than go out.

As the tournament has expanded to 24 countries for the first time, there is now the need for a last-16 stage.

Finishing first or second in a group guarantees progress, but there will also be room for the four sides who finish third with the best points tallies.

That means only eight out of 24 teams will be eliminated at the group stage.

The group no team wants to be in

As one team comes from each pot, it is possible world champions Germany could be joined by Italy, Poland and Wales, the highest-ranked side in Pot 4.

The only side with a 100% record in qualifying, England scored 31 goals, a tally only bettered by Poland's 33.

The reward is a spot in Pot 1 alongside defending champions Spain, Germany, Portugal and the world's top-ranked side, Belgium.

That means England cannot be drawn against any of those nations, or hosts France.

There is a 50% chance they will be drawn with Wales, Northern Ireland or Republic of Ireland.

Manager Roy Hodgson: "I believe in the players and, given the opportunities, they can become a good team. But we are young, we are inexperienced - nothing is going to change that.

"This group of players won't let anyone down in terms of their attitude and desire. If they do fail it might just be because of inexperience or a lack of quality."

Wales will make their debut at a European Championship finals in what will be their first appearance at a major tournament since the 1958 World Cup.

They did reach the European Championship quarter-finals in 1976, but only the semi-finals onwards were regarded as the 'finals'.

In Gareth Bale they boast the most influential player in qualifying - the Real Madrid forward was involved in 82% of their 11 goals, scoring seven and creating two.

Manager Chris Coleman: "It looks great but we don't want to be in the same group as England. They are a very, very good team and with Roy Hodgson in charge they will be a tough nut for us to crack."

Northern Ireland fans had endured 14 unsuccessful qualifying campaigns since they last appeared at a major finals - the 1986 World Cup.

But they ended that wait - and reached a European Championship for the first time - as they advanced with a game to spare as group winners.

They scored 56% of their goals in qualifying from set-pieces, so will pose a threat to more established international sides at the finals.

Manager Michael O'Neill: "Playing France in the opening game would be a special experience. I suppose you would look to avoid Italy from Pot 2 and probably an England game as well, simply because the attention around that could overshadow everything else."

The Republic beat England in their 1988 European Championship opener but failed to win another game in that tournament and lost all three of their matches at Euro 2012, albeit in a tough group featuring Spain, Italy and Croatia.

They have plenty of experience to draw on, boasting the oldest average squad in qualifying.

Manager Martin O'Neill: "We might be short on a few things, but courage and a determination to fight to the end have been in abundance.

"We do not want to go there just to make up the numbers. We will go there to do the country proud and put on a good performance." 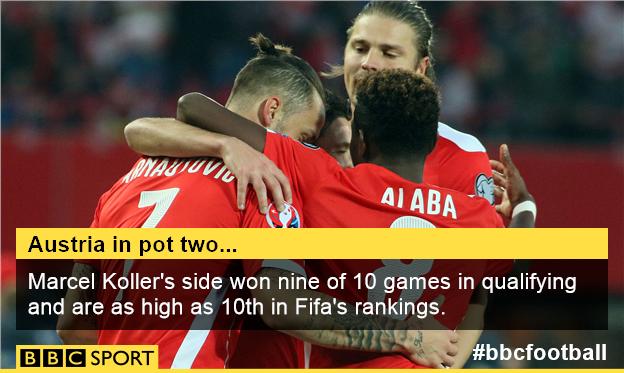 They'll give you a chance... 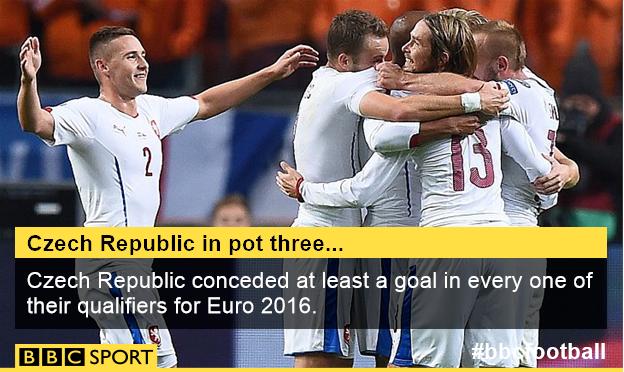 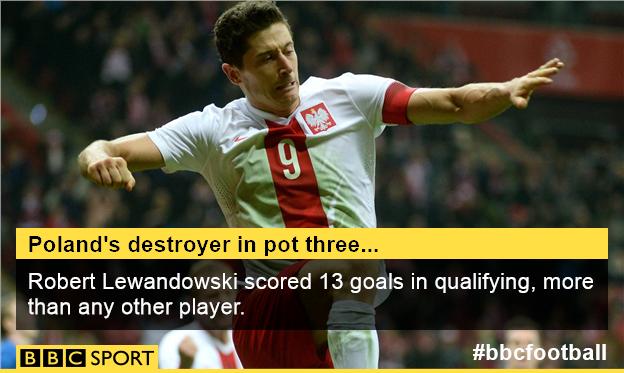