Manchester United boss Louis van Gaal urged his team "to stick together" as he set a target of three successive victories to keep his side in the Premier League title race.

A 2-1 defeat at Bournemouth on Saturday means United have won just two of their last seven league games.

They are fourth in the standings, three points behind leaders Manchester City.

"Losing two in a row is disappointing, now we have to stay in a position to keep fighting," said Van Gaal.

"We now have to win three matches in a row to still be up there after Christmas."

'Title not out of reach'

United, without a win in their last five games in all competitions, host Norwich next Saturday before travelling to Stoke on Boxing Day and then entertaining Chelsea on 28 December.

Leicester, second in table and with a game in hand over United, host Jose Mourinho's side on Monday and a win for the Foxes would leave Van Gaal's side five points off the top.

Asked if United can still challenge for the title, the Dutchman added: "We have the selection to do that, but we are in a very difficult position because of injuries.

"We have to play a lot of youngsters, who have played well, but we have to make a revival because we have lost two matches in a row."

'The players are committed' 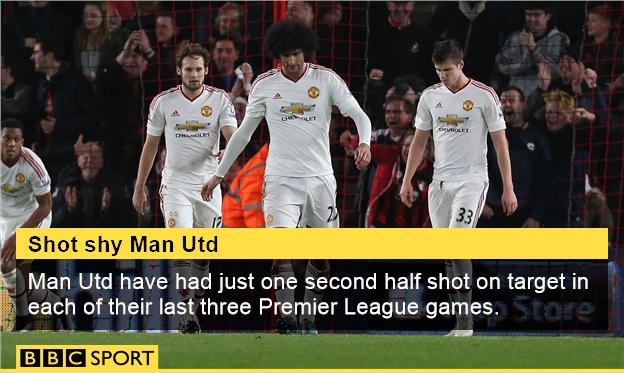 Bournemouth's goals both game from set-pieces, which Van Gaal described as "unacceptable".

However, he praised the attitude of his players, who he believes are firmly behind him.

"You have to perform in a certain way," he added. "I was pleased with what I saw in the first half.

"For me the most important thing is the commitment of my players to perform as we have agreed and I can only tell they want to do that."