World Cup and European Championship winner Thierry Henry has joined the BBC punditry team for this summer's Euro 2016 in his home country.

Henry won the tournament in 2000 and was also part of the World Cup-winning France team in 1998.

The former Arsenal striker was part of the BBC's World Cup coverage for Brazil 2014.

He joins the BBC team led by Gary Lineker and Alan Shearer, plus a number of other big international names.

BBC Sport will broadcast 26 games during Euro 2016, including the standout match of the group stage as England face Wales.

Henry said: "I really enjoyed the World Cup in Brazil and it was a completely different experience as a pundit rather than a player. I am enjoying my broadcasting work and look forward to being part of the BBC's team, covering some of the great matches featuring Europe's best players.

"It is a tournament that is very close to my heart, having won it 15 years ago, and the fact it is being held in France will make it an extra special experience."

Philip Bernie, Head of TV Sport for the BBC, added: "We are delighted to have Thierry as part of the BBC team in Paris. He will bring a real insight into what is required to win this tournament and also what it's like to be victorious at a major event on home soil.

"We believe we have assembled a very impressive team of international stars and Thierry will really shine alongside Gary Lineker and Alan Shearer." 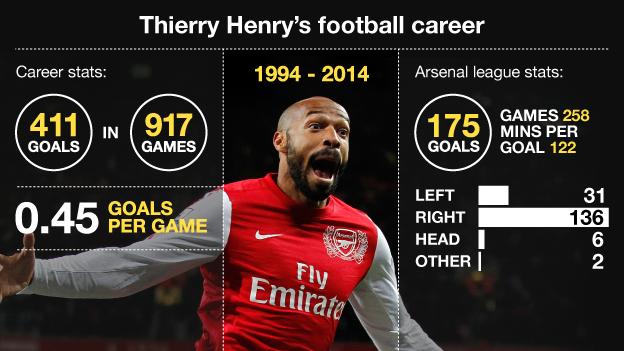