Swansea are unlikely to have a new manager in time for Sunday's Premier League match against West Ham United.

Chairman Huw Jenkins has returned from South America where he is understood to have met former Argentina and Chile manager Marcelo Bielsa.

The 60-year-old, who resigned from French club Marseille in August, is strong favourite to succeed Garry Monk.

If appointed, Bielsa will not arrive by Sunday, so caretaker Alan Curtis is set to be in charge for a second game.

Speculation of a deal to bring Bielsa to the Liberty Stadium was further fuelled on Wednesday evening when club director Huw Cooze tweeted the single word "Hola" - Spanish for hello.

However, there was been no official statement by Swansea regarding an offer of a job to the Argentinian.

The 61-year-old Curtis was in the dug-out for the 2-1 defeat by Manchester City last Saturday, the first match after Monk's departure.

The Swans are fourth from bottom of the Premier League after a run which has seen them win only once in 12 matches.

Their total of 14 points is the same as 18th-placed Norwich and only one less than defending champions Chelsea.

It is in stark contrast to last season when Monk guided Swansea to 8th in the table with a record Premier League points total of 56. 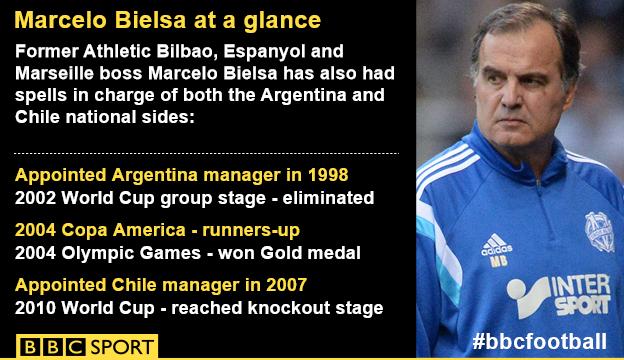 Swansea are still hopeful of bringing the experienced Bielsa to the Liberty Stadium, in spite of reports that his financial demands may be a stumbling block.

On the field, captain Ashley Williams said the players are keen to build on the improvement in form they showed against Manchester City.

"We've got Alan Curtis and Dave Adams in charge at the minute and we give them our full backing until the next manager comes in," he said.

"I think it is down to the senior boys trying to make sure everything goes as smoothly as possible, which we did last week and the start of this week, and we'll continue to do that until we hear any different."