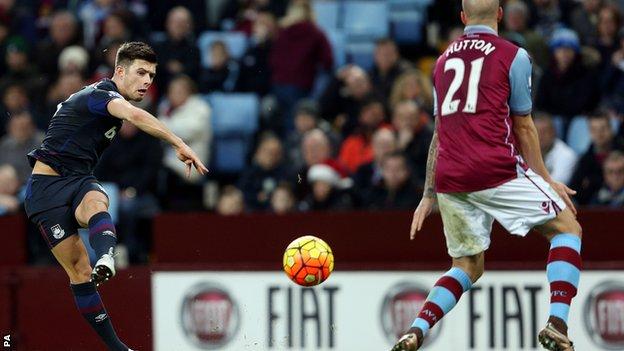 A Jordan Ayew penalty helped bottom-of-the-table Aston Villa come from behind to earn a draw against a West Ham team which has not won since 24 October.

In an evenly contested game, Villa twice went close in the first half through Rudy Gestede before Aaron Cresswell scored with a low strike.

The spirited hosts levelled through Ayew after Gestede was clumsily felled by Angelo Ogbonna.

As Villa searched for the winner, Alan Hutton went close with a header.

But the right-back's effort was cleared by James Collins as West Ham held on for their fifth successive draw to remain ninth in the league.

Villa have now battled back to earn a point in successive league matches, but Remi Garde's team desperately need to start collecting three points if they are to overcome the odds and maintain their Premier League status.

Garde has yet to oversee a Villa victory since succeeding Tim Sherwood as manager at the beginning of November, although there may be some solace in the desire his side displayed against a well-organised West Ham side despite falling behind just before half-time.

The grim reality, however, is that Villa have not won since the opening day of the season and are now 10 matches without a win at Villa Park and nine points from safety.

Only three of the previous 23 sides who were bottom of the Premier League on Christmas Day have avoided relegation, although the last two sides in that position - Leicester in 2014 and Sunderland in 2013 - did both survive.

Hammers masters of the draw

Although Villa fans might look at their mid-table rivals with envy, Slaven Bilic's side are enduring a slump of their own slump after promising early-season form.

The Londoners' winless run has coincided with the absence of the injured Dimitri Payet - scorer of five goals in an impressive start since his arrival from Marseilles - and the France international's return in the New Year will be welcomed by Bilic's injury-hit side.

West Ham are defensively sound - enjoying three successive clean sheets prior to this match - but currently lack cutting edge in front of goal.

Not many sides would have been as obliging as Villa in giving Cresswell the freedom to roam down the left, before cutting inside and striking low into the far corner from the edge of the box to end West Ham's 388-minute goal drought.

The Hammers had their chances, with Cheikhou Kouyate hitting the crossbar before Cresswell opened the scoring, but a draw was a fair result as the visitors' verve died away after the break and the hosts came back into it.

Man of the match - Jordan Ayew

Aston Villa boss Remi Garde: "I knew this game was crucial for us. I wanted to win. A draw was not the goal for this game.

"We only missed the points. What we put into this game was probably the best we can do. I think we deserved more than we got. I am frustrated and also a bit sad for my players.

"We are still in a very bad position but when I see my team play it's very encouraging. The performance we gave was not a bottom one. We have to score goals and be more efficient in the offensive parts."

West Ham manager Slaven Bilic on Villa's penalty: "I am not happy with that of course. From my point of view I saw Rudy Gestede was pulling Ogbonna's shirt. With that it gained him an advantage and he got in front of Angelo. For me it was a foul.

"He gave a penalty but if he gave that he should have given a penalty for one of the handballs for us. Unfortunately, he didn't.

"It's mixed emotions for us. When you are leading 1-0 at half-time against a team which is fighting for their lives and nervous, you expect to win the game.

"They scored a penalty and then got the momentum so it was a fair point. With the injuries and everything that happened we showed good character. We got a point away from home which is good. Hopefully we will have a few players back very soon."

Prior to this match, Garde had said his team needed "at least 10 victories" from their remaining 21 matches to avoid relegation, and one of those victories must surely come against fellow strugglers Norwich on Monday.

On the same day, West Ham will hope to end their eight-match winless run against a Southampton side which enjoyed a thumping 4-0 win over Arsenal on Boxing Day.