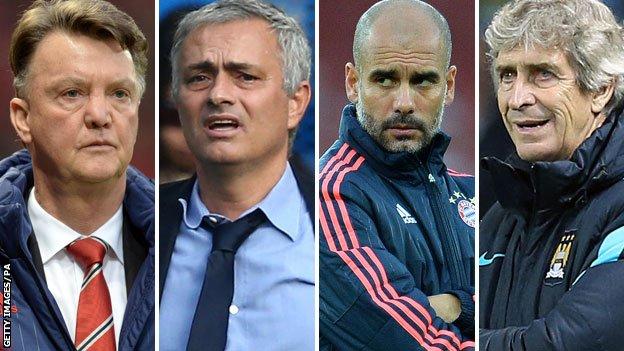 Chelsea's sacking of Jose Mourinho and Pep Guardiola's decision to leave Bayern Munich at the end of the season leaves two of the world's elite managers on the open market.

And now, to add to the intrigue, Manchester United manager Louis van Gaal is fighting to save his job after the home loss to Norwich City left him admitting he was worried about his future after six games without a win that also saw them eliminated from the Champions League.

So the pieces of world football's managerial jigsaw have been shaken in the box - where will they all fall into place?

The 52-year-old Portuguese has long been linked with Old Trafford and was in the board's thoughts when Sir Alex Ferguson retired in 2013 but had already committed to a return to Chelsea.

Mourinho has the double appeal of being not only readily available but also having the status of Premier League title winner just seven months ago at Stamford Bridge.

The pragmatic style he employs may take some getting used to, or even tailoring at the 'Theatre of Dreams', but he is ready to return immediately and will have a point to prove after his Chelsea exit.

The most coveted coaching name in world football and available at the end of the season - it is almost inconceivable he will not have been discussed as United plan for the future. He was another considered when Ferguson left but he never returned their call.

The 44-year-old Spaniard, who won two Champions Leagues at Barcelona, would be the dream choice at Old Trafford - among many other places - but there is the lingering belief he is destined to join old Nou Camp cohorts Tziki Begiristain and Ferran Soriano at Manchester City.

United may still hold appeal but would the club make the call knowing they might end up looking like they have been snubbed for their neighbours?

Van Gaal, 64, was regarded as the man to bring stability and progress to the chaos left behind by the brief and dismal reign of David Moyes in succession to Ferguson.

The Dutchman also brought iron will and discipline. Van Gaal's first season, while not sparkling, could be considered a success as he restored United to the Premier League's top four and back to the Champions League.

Despite his spending in excess of £250m, Van Gaal has looked a manager out of time, seemingly at odds with his joyless players and increasingly receiving the ire of fans because of that toxic football combination of dull performances and bad results.

While the Champions League exit may not have delivered the fatal blow, poor league results and a general air of discontent around Old Trafford has put Van Gaal on the brink.

He will need a big turnaround to survive in the short-term and, despite United's best intentions, is unlikely to last the full term of his contract until the end of next season.

The continuity candidate and a graduate from Old Trafford's 'Class Of '92', Giggs has been the quietest second fiddle, sitting silently next to Van Gaal as his assistant but with the dictatorial Dutchman making all the calls.

The Welshman has long been touted as a future United manager, but is the 42-year-old - who made a record 963 appearances for the club, winning 13 titles, four FA Cups and two Champions Leagues among 34 trophies - up to the job?

Giggs might be the romantic choice of some United fans but he has no full-time managerial experience and no body of work to suggest he would be a success in this toughest and most demanding of environments.

Has he actually moved further away from the United manager's job than closer to it while sitting next to Van Gaal?

VERDICT: Van Gaal is struggling and seemingly near the end of the line. Mourinho is available and letting it be known to all of the world's biggest clubs that he is awaiting the call? Mourinho to Manchester United is starting to look the next big managerial move.

The Manchester City job appears to have had Guardiola's name on it for years - with the pieces seemingly put in place for his arrival at the Etihad.

All it needed was the nod from Guardiola himself and that seems to have moved closer with his decision to leave Bayern Munich at the end of this season. The Premier League looks certain to be his next stop.

Begiristain and Soriano are already in place and ready to welcome the man they worked with to bring such success to Barcelona. Guardiola's arrival would complete the managerial infrastructure you suspect has been the long-held dream to match the fierce ambition of City's Abu Dhabi owners.

Guardiola may yet be diverted off course by offers from elsewhere - perhaps Manchester United or even Chelsea - but all the smart money is on that dream ticket finally being in place at the Etihad at the start of next season.

Mourinho was linked with the Barcelona job when Begiristain was at the Nou Camp in 2008 but it was felt his personality was not right and the job went to Guardiola.

Nothing has happened since to suggest City would have a change of heart and entertain Mourinho as their manager.

The 62-year-old Chilean has the biggest opportunity of all to muddy the waters surrounding Guardiola's seemingly inevitable arrival at City by bringing them success this season.

Pellegrini has had his contract extended until the end of next season and City are not just favourites to win the Premier League but also finally have a favourable draw in the last 16 of the Champions League against Dynamo Kiev.

You suspect it will take something special to divert City's attention should Guardiola make it known he wished to manage them - but at least Pellegrini still has the chance to turn heads at the Etihad.

VERDICT: Guardiola simply looks the perfect fit for Manchester City and the framework is already in place behind the scenes with its Barcelona background. Pellegrini may make City think with a title or Champions League - but few would back against Guardiola now. 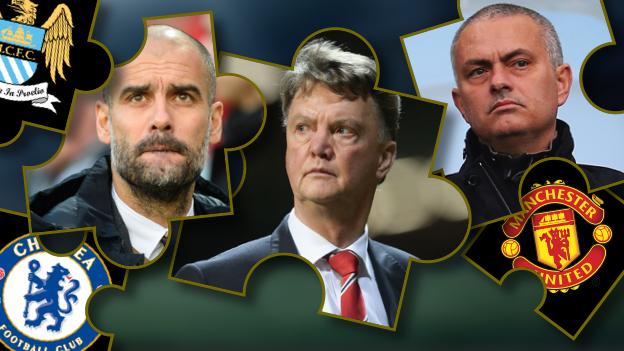 Guardiola has long been Roman Abramovich's dream choice to manage Chelsea and it seems the Russian owner would be prepared to pay any price to get his hands on him at Stamford Bridge.

However, the Catalan has remained tantalisingly out of reach, perhaps put off by the revolving door for managers at Chelsea and Abramovich's lack of patience when results go wrong.

Guardiola and Chelsea has never seemed a natural fit, despite the perfect London location, and it would take all of Abramovich's pounds and powers of persuasion to make a difference as he searches for a successor to Mourinho.

It seems the overall package is key to Guardiola, not just finance, so Abramovich may be destined to miss out once more.

If a move for Guardiola fails, the 45-year-old Argentine firebrand who has led Atletico Madrid to the Spanish title and a Champions League final they were only seconds away from winning against Real Madrid in 2014 seems an ideal choice.

Fiercely driven, arguably even more combustible in the technical area than Mourinho, Simeone has proved himself by taking Atletico to second in La Liga again this season.

There may be complications. Simeone signed a new five-year deal in March and, while that is hardly insurmountable, the fact he is fiercely, emotionally connected to Atletico is.

Only on Sunday he said: "Why can't I be here longer? Why did I choose a five-year contract? Because I saw a club that is 'virgin.'"

He added: "More than a team we are a family - and a real family."

Abramovich may be left with the tough task of working out a way to break that family up.

Abramovich's decision to turn to the 69-year-old Dutchman is the sign of the trust he places in Hiddink - especially as his career has fallen off a cliff since he brought the FA Cup to Chelsea in 2009 and was only a last-minute Barcelona equaliser away from the Champions League final.

Hiddink has failed with Russia and Turkey and left his last job in charge of the Netherlands with their Euro 2016 qualifying campaign in tatters. He only succeeded Louis van Gaal in 2014 but lost five of his 10 games in charge.

Possession is nine tenths of the law, so they say, and he may be able to offer a long-term solution if he produces spectacular results - but would he really want to do that at his age, even if he is a success?

Hiddink is surely only the sticking plaster until summer.

Manchester City's manager may be looking for work in the summer and has won the Premier League title as well as having a measure of Champions League success with Villarreal and Malaga.

Experienced and calm, he may be a target should Abramovich miss out on Guardiola and Simeone - but a long shot.

In the stands at Stamford Bridge alongside Abramovich for the first game of the post-Mourinho era, the 3-1 win against Sunderland - and plenty of Chelsea fans would love to see the 37-year-old Champions League-winning legend back in some capacity.

One for the future and possibly part of Hiddink's temporary backroom team but not for the present.

VERDICT: In an ideal world Guardiola would be Abramovich's man, but he looks destined for Manchester City so expect Chelsea to go all out to bring in Simeone, whose fiery personality and intense style of management and play will be another big addition to the Premier League.

No imminent vacancies at Arsenal with Arsene Wenger chasing his first title since 2004 and somehow trying to find a way around Barcelona in the Champions League.

What if, though, the 66-year-old who has managed the Gunners since 1996 ends empty-handed and Guardiola is on the market?

Arsenal is actually the perfect fit. New stadium, outstanding infrastructure, huge funds to transform the team. Ideal for any manager in world football.

No sign of change at Arsenal but who knows at the end of the season?