Dagenham & Redbridge have sacked manager Wayne Burnett following a run of one win in 16 games in League Two.

The 44-year-old had been in charge of the Daggers, who are bottom of the table, since February 2013.

A statement on the club website said both Burnett and the Dagenham board "felt a change was necessary in order to turn around the team's fortunes".

Coaches Darren Currie and Warren Hackett have been placed in charge until a replacement is named.

Burnett initially took charge of Dagenham on an interim basis following the departure of John Still to Luton, but he was handed a permanent deal in the summer of 2013 after keeping the club in League Two.

He led the east London side to mid-table finishes in the last two seasons, ending 9th and 14th respectively, despite working with one of the lowest playing budgets in the division.

Dagenham have won just two of their 22 league games this season but, following Saturday's 3-0 defeat at home by Bristol Rovers, Burnett told BBC Radio London he would not resign.

"I've never quit in anything that I've done. I am proud to do the job and am working tirelessly," he said.

"If the fans want to sing for me to be sacked then that's their choice.

"The only people that can make that decision is the board. If they no longer feel I can do the job that is required, then that is their decision they have to make."

BBC Sport understands Dagenham, who are two points from safety, are looking at a short-term appointment as they fight relegation from the Football League.

Still, 65, spent nine years as Daggers boss before joining the Hatters and is available to return to Victoria Road after leaving Luton last week. 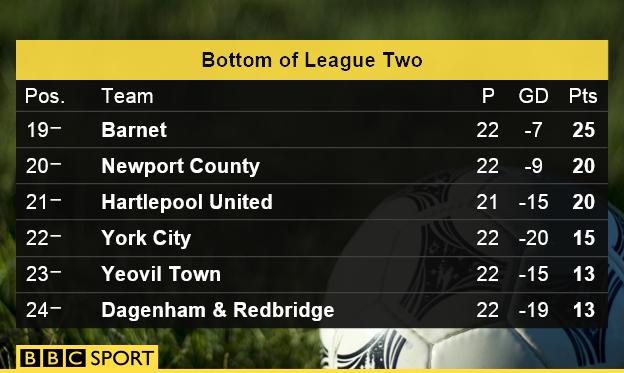