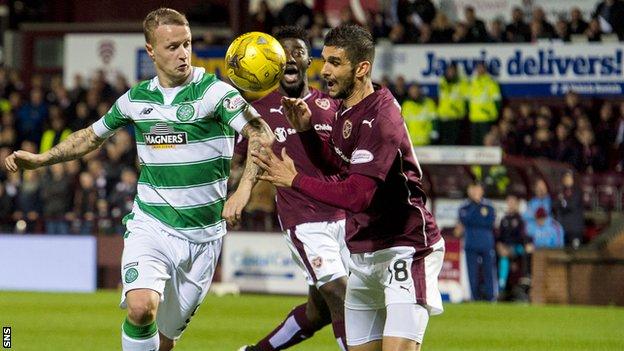 The Edinburgh club, in third place in the Premiership, face Celtic at the beginning of a "hectic schedule".

"These are great games to be involved in because you can play football in them," Neilson told BBC Scotland.

"I expect it to be a tactical game. If we get a result then it brings us closer to the top of the league."

Hearts, with three draws and a defeat in their last four league games, will be aiming to halt that winless run at Tynecastle.

"Since I've been the manager here the best we've got is a draw against [Celtic]. I'd like to try to get three points," said Neilson.

"We've got a hectic schedule: we've got Dundee United and Kilmarnock then Aberdeen. But it's a huge game on Sunday and we need to ensure we focus totally on that.

"It's important that you try to get through it. We've got a game in hand over Aberdeen; we're still in a good position."

Neilson says his players are looking forward to facing Celtic, adding: "We know what we want to do and the way we want to play.

Celtic manager Ronny Deila has received criticism for his side's recent form but Neilson does not believe that will have a bearing at Tynecastle.

"When you're head coach of a huge club like Celtic then there's always going to be pressure on you," Neilson added.

"Ronny will handle that as he always has done: very well. I don't think that will have any influence on the game."