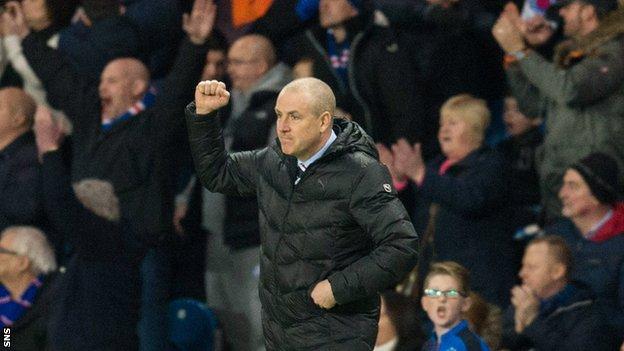 Mark Warburton says he used criticisms of his Rangers team in the media to spur them to victory over Hibernian.

The Rangers manager said his players were as irate as he was after the league leaders were described as "spineless" in newspapers.

They responded with a 4-2 win to move three points clear at the top of the Scottish Championship.

"There were lots of comments about us having no spine, which I think is hugely disrespectful to us," he said.

"I think they were ill-judged and totally inaccurate, but we used them yesterday.

''The media in Scotland is very different. I'd been warned about it but you get used to it very quickly. It is what it is but you have to deal with that.

''Criticism you expect, but when comments refer to you having no spine, you have to respond and we did it yesterday in front of a packed Ibrox.''

Rangers went into the game having dropped points to Livingston, Morton and Falkirk, and letting slip what had at one time been an 11-point lead over Alan Stubb's men.

Unlike some managers who claim not to read newspapers or be affected by what's written in them, Warburton admits sometimes he takes what he considers as unjustified criticism personally.

''You can't fail to read it," said Warburton. "95% of the time you can ignore it but sometimes when I think it's inappropriate you have to respond and use it to sharpen the focus and we did that yesterday.''

Warburton describes his squad as 'being in good shape', but said he is hoping to bring in players for the second half of the season when the transfer window opens in January.

''There are two or three targets we hope we can secure, but of we don't get them we won't just bring in others to bring in the numbers," he said.

''The work's been done weeks and weeks ago, but for want of a better phrase, it's a fluid market and it moves quickly, deals can be missed. But hopefully we've done our homework and we can land one or two.''