The impressive Oliver Burke teed up Forest's deserved half-time lead when his run ended with a mis-hit cross which was turned in by Ward.

QPR improved after half-time but were unable to create many opportunities.

Gabriele Angella went close with a header but Forest held firm to ensure QPR remain winless at the City Ground.

Their 31st attempt to break that record looked like failing from early on as Forest appeared sharper in midfield and more threatening in attack.

Teenager Burke was the game's standout player, and his moment of class and fine burst forward from halfway led to Ward sliding in his first Forest goal on 24 minutes.

Rangers had the better of things on the resumption, but still struggled to create clear chances and earn a first win victory under new manager Jimmy Floyd Hasselbaink in his seventh attempt.

Reds keeper Dorus de Vries did have to make made a superb save to tip over Angella's header.

But Forest's win was marred by an injury to Henri Lansbury

The midfielder had to be given oxygen and have his leg put in a brace after falling awkwardly soon after coming on as a second-half substitute. 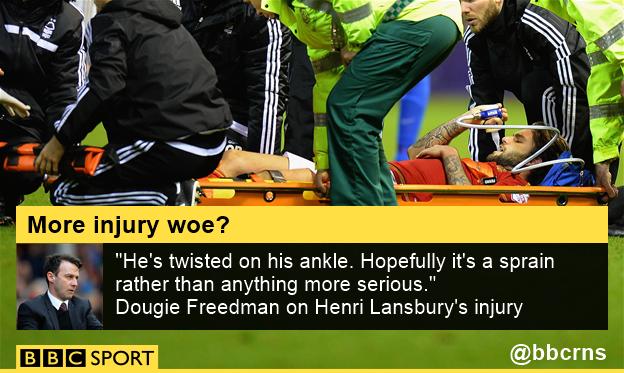 Nottingham Forest boss Dougie Freedman: "We are pleased under the circumstances, because we played a few players who have not played in a long time, in Gary Gardner and Chris Cohen and Oliver Burke, who was starting only his third game.

"It is very pleasing to be in the next round, which was our objective at the start of the day.

"Oliver has a lot of learning to do, he is a player with real potential - but he is growing into a dangerous player for us. He tired in the second half, as did one or two others.

"If we can keep him fresh and get him running at people, he is going to be a big asset for us."

QPR manager Jimmy Floyd Hasselbaink: "That was a poor first half from us, but much better in the second half. We have started to look a bit more like the team I want us to be.

"The way we are going to get a win is through working together, believing together and being a team.

"It is not to do with what we can or can't achieve in the January transfer window, it is about putting it all together. I am seeing the signs here and there, in every game. But it has to come out now as one continuous performance.

"Against Forest it was like night and day, that is how much we improved. It would be great to carry that forward into next week. We just need a break."