The visitors took a surprise lead when Jeremain Lens struck inside the box.

Substitute Aaron Ramsey tapped in late on to put Arsenal ahead before Olivier Giroud's close-range finish wrapped up a 13th consecutive win in the FA Cup.

Wenger has his eye on the prize 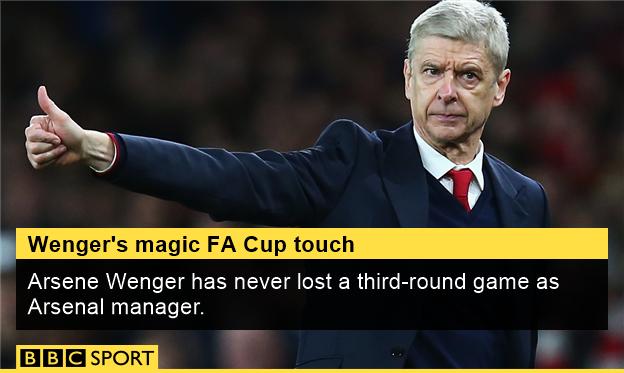 Arsenal, who beat Aston Villa 4-0 in last season's final, have won the FA Cup 12 times - more than any other side.

Six of those have come under Arsene Wenger, who will become the competition's most successful manager with one more victory.

Arsenal may be top of the Premier League, but Wenger underlined his intention to take the FA Cup seriously by naming a strong side, with first-team regulars Petr Cech, Oxlade-Chamberlain, Giroud and Theo Walcott all included.

It was a decision that paid off. After Sunderland's unexpected opener, Walcott provided the assist for Arsenal's equaliser and Hector Bellerin played a key role in their next two goals as the hosts' experienced men carried them forward while the visitors' mix of fringe and youth players wilted.

A defeat, but some positives for Sunderland

Sunderland's priority is clear - Premier League survival - and that was reflected in Sam Allardyce's team selection, with the Black Cats showing seven changes.

They looked to have continued their momentum when they stunned Arsenal to take the lead, Lens taking advantage of some uncharacteristic hesitancy in the Gunners' defence to score.

That was only Lens' third goal in 17 appearances for Sunderland, but his overall play will have been encouraging for Black Cats fans as his pace and physical presence caused the hosts a number of problems.

He possesses the ability to be an important player for Sunderland in their battle against relegation. The question is, can he perform like he did against Arsenal on a consistent basis?

Man of the match - Hector Bellerin

Arsenal boss Arsene Wenger: "It was a test for us to come from behind. There was a great mental response and there is a special solidarity in the team.

"You always worry because, no matter how long you are in this job, you never know what is next. The experience we had up front today helped. I am very happy overall."

Sunderland manager Sam Allardyce: "In the end they had better finishers than we had today. We were fine for 70 minutes and I am just a little sad at the goals we allowed Arsenal to score. We made it easy for them in the end.

"We move on. The squad has shown they can play at this level. Lens is strong on the ball as well as talented. Hopefully we can push on and see a bit more from him."

Arsenal travel to Liverpool in the Premier League on Wednesday, while Sunderland are at Swansea on the same day.

The FA Cup fourth-round draw takes place on Monday and is live on The One Show on BBC One from 19:00 GMT.

Shots on Target
Home13
Away3