Lionel Messi has been named winner of the Ballon d'Or for the fifth time, but does he fit a mould spanning 60 years?

The forward - standing 5ft 7in - comes in shorter on average than the 59 previous winners of the award, handed to the player deemed the best on the planet.

But what does such a rare player typically look like? Where are they from? And what heroics typically see someone take the honour?

From inaugural winner Stanley Matthews in 1956 to Real Madrid superstar Cristiano Ronaldo last year, we have profiled each of the recipients prior to Messi's win to analyse the "perfect" Ballon d'Or winner.

Note: The Ballon d'Or could only be won by European footballers between 1956 and 1994. Nominations were extended to include Europe-based players in 1995. In 2010 it became the world player of the year.

So if you're a 26-year-old, dark-haired, right-footed, German/Dutch-born Barcelona forward then you've a great chance of bagging the trophy.

But what about winning the World Cup or European Championship? Does lifting either trophy, or simply catching the eye that summer, help propel a player towards Ballon d'Or glory?

Only 36% helped their nation win the European Championship on the way to earning that year's Ballon d'Or.

However, strong performances by an individual at a major international tournament - for example, Czechoslovakia midfielder Josef Masopust at the 1962 World Cup finals, or USSR midfielder Igor Belanov at Mexico 86 - have helped unfancied names earn their place on the gold-covered bauble. 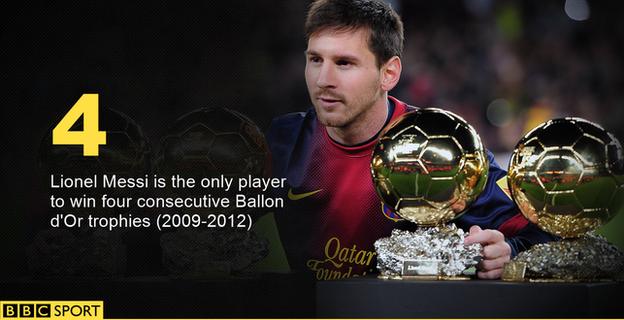 England winger Matthews, then aged 41, was the first player to win the prize - but only five other men from the UK have followed in his footsteps.