The 31-year-old midfielder is England's most-capped player of all time, having represented her country 148 times.

Williams was part of the squad that finished third at last year's World Cup and was awarded an MBE in the New Year Honours list.

"Fara is a great competitor and a fantastic character, too," said Gunners boss Pedro Martinez Losa.

"She is a player with huge experience at club and international level, and her reading and understanding of games is fantastic."

Williams, who has also had spells at Chelsea, Charlton and Everton, helped the Reds win the FA Women's Super League title in 2013 and 2014.

Arsenal have not disclosed the length of her contract, but Williams tweeted she had signed with the north London side for two years.

This is a big coup for Arsenal and their fans.

With three World Cups, three European Championships and the London Olympics under her belt, 31-year-old Williams will add plenty of experience to their midfield.

Arsenal claimed the Continental Cup in 2015. Making a signing like this shows great intent as Arsenal look to win their first league title since 2012.

But it's another blow for Liverpool, whose slide continues.

Champions in 2013 and 2014, Liverpool finished second bottom in the WSL last season and Williams has now become the seventh player to leave the club in the transfer window. 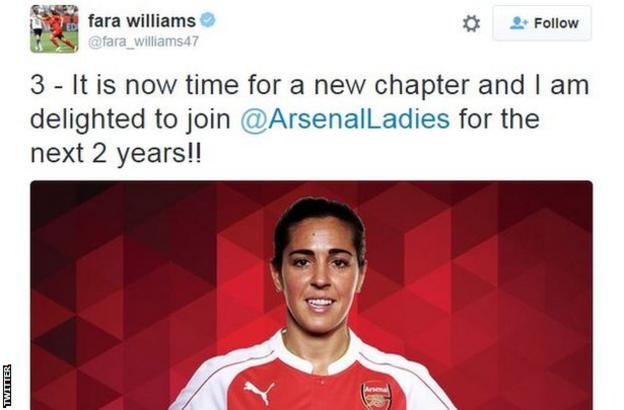