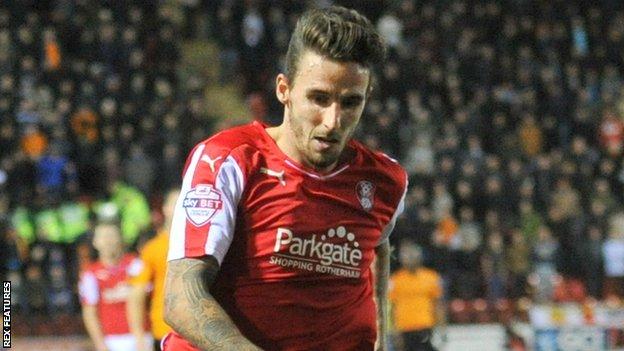 Struggling Rotherham consigned Brighton to their first away defeat of the season in the Championship.

Danny Ward gave the hosts the lead just before half-time as he volleyed in from Joe Mattock's cross.

Brighton improved after the break, but Matt Derbyshire increased the Millers' lead by stabbing home from close range.

Tomer Hemed hit the post late on for the Seagulls, but the visitors - who slip to sixth in the table - could not find a way past keeper Lee Camp.

The result means Rotherham move up to 20th in the Championship table while Brighton have now gone six games without a goal and are winless in eight games in all competitions.

The hosts went ahead when Mattock sent in a left-wing cross which had Seagulls defender Lewis Dunk fooled as Ward volleyed from close range.

Rotherham doubled their lead late in the second half as Bruno Saltor headed into the path of Derbyshire who easily tapped home from six yards.

Brighton came close to finding a consolation when Hemed hit the post from close range, but they could not find a breakthrough.

"We deserved it, I don't think anybody could doubt that.

"The fact that you have got that energy up front helps you defend from the front. It's a long season, we haven't got to look too far ahead, we have got to keep chipping away.

"In the second half we gave ourselves opportunities to get back in the game. I think we were well off it in the first half, they got a rhythm.

"At the minute, most defensive mistakes we are getting punished for and you can't win football games if you don't score and we are struggling at that.

"Arguably there's stuff we're not getting away with at the minute that we were in our good run. We are getting punished for mistakes."