The Foxes, who are now level on points with leaders Arsenal, looked like they were heading for a fourth league game without a goal until unmarked Huth headed home Christian Fuchs' corner.

Harry Kane had Spurs' best chance when his effort was touched on to the bar by keeper Kasper Schmeichel.

Foxes striker Jamie Vardy returned from groin surgery but had a quiet game.

It was the second of three meetings between the clubs in 10 days, following Sunday's 2-2 FA Cup draw - with their replay to be shown on BBC One, next Wednesday.

Listen: 'Leicester would be devastated not to make Champions League now'

Football Daily podcast - Does anyone want to win the league?

There had been fears Leicester's slide was beginning after three games without scoring - and they looked like making that four in a row before Huth's late goal.

But this win - which takes them seven points above fourth-placed Spurs and eight clear of West Ham in fifth - will give them real hope of finishing in the Champions League places, if not higher.

They were characteristically short of possession with only 39% - their average of 40.62% is the third lowest in the league - but they have shown they are far from a two-man team with Riyad Mahrez and Vardy, their two stars of the campaign, subdued throughout.

Do Spurs need a new striker?

Maybe, but it was wasteful finishing rather than the lack of a second striker that cost Spurs against the Foxes.

Manager Mauricio Pochettino has continually insisted it is not urgent they sign a new striker to partner Kane, who is their top scorer with 11 league goals.

The England international was their sole striker against Leicester but Spurs' formation meant Erik Lamela, Christian Eriksen and Dele Alli got forward to support him regularly.

Those four had a combined 18 shots, although Kane's effort which Schmeichel touched on to the bar was one of only five shots on target the team managed.

Man of the match - Robert Huth

Former England captain Alan Shearer on Match of the Day: "It's a remarkable story for Leicester. Only Manchester City have scored more goals than them.

"It was a good old-fashioned proper plant your feet, arch your back and get your neck muscles going header from Huth. Look at the power. Boof."

Ex-Germany midfielder Dietmar Hamann: "It's a blip for Spurs. They're still in a good position and favourites to reach the Champions League. The worry is the lack of form from Christian Eriksen, who hasn't scored in the league since October. They are over-reliant on Harry Kane. If he gets injured they'll be in trouble."

'So much work to do'

Leicester boss Claudio Ranieri told BBC Match of the Day: "We wanted to win but we knew it was a difficult match. Tottenham started very well and put us under pressure but we didn't lose our confidence or shape and it was difficult for them.

"In the second half it was an open match. We both had chances and we scored the goal. Unfortunately it's January, not May. There's so much work to do. We have to remain calm and believe in what we're doing."

Spurs boss Mauricio Pochettino: "I'm disappointed. We created the better chances. You need to score. We need to keep calm and try to improve.

"All the stats are positive for us. It's difficult to explain - we deserved more and to win the game. In football you can get punished for one little mistake. We are going to try to analyse the game. We were unlucky tonight."

Next up for both sides

Both sides will be confident of wins on Saturday in the Premier League. Leicester visit bottom side Aston Villa, while Tottenham host third-from-bottom Sunderland.

The Foxes and Spurs then meet again next Wednesday in their televised FA Cup third-round replay. 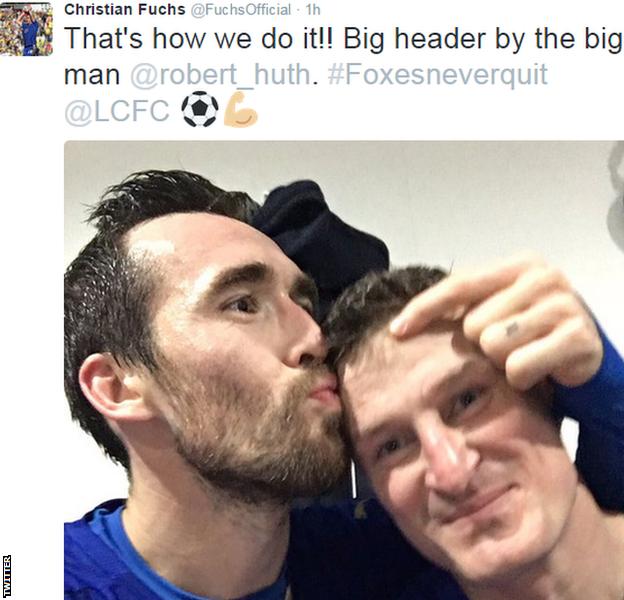