As a goalkeeper, Stuart Tomlinson's size made him a regular target of abuse from opposition fans.

Stick 'Stuart Tomlinson fat chant' into a search engine and you'll find AFC Wimbledon supporters mercilessly taunting him with an "Any pie will do" sing-a-long during his time at Burton Albion.

Lord knows what they'd chant at him now as he dances his way to a wrestling ring wearing only a pair of boots and some pink polka dot trunks.

It turns out the former Crewe, Barrow, Port Vale and Burton keeper wasn't fat at all. Nicknamed 'The Tank', he had a torso chiselled out of granite, honed by hours in the gym. Another online video shows him bench-pressing 180kg. In flip-flops.

Tomlinson was so toned he did some modelling on the side and even adorned the cover of Men's Health magazine. It proved the launch-pad for a transformation that saw him swap the penalty box for a wrestling ring, and move from professional sportsman to sports entertainer inside a year.

The magazine cover was seen by a talent scout from World Wrestling Entertainment (WWE), the world's largest professional wrestling promotion which has been home to the likes of Hulk Hogan, the Undertaker and the Rock.

"Most of the lads who I played with knew I was a wrestling fan, particularly at Port Vale," said Tomlinson. "When we were travelling, I was always talking about what I'd watched.

"Going into wrestling when I finished football was definitely something I thought about, but I never knew how to get involved. Luckily enough I was there when opportunities were being given, in the right place at the right time."

Tomlinson was still at Burton when he got invited to a WWE try-out, something he kept quiet because "in a changing room full of 20 or 30 lads you don't go running your mouth off".

He pitched up to his trial at the O2 Arena with no experience of what the WWE likes to call 'sports entertainment' - sport because the athleticism and risks involved are very real, entertainment because the characters are outlandish, the storylines soap-like and the results of matches predetermined.

Still, his football background gave Tomlinson the edge over thousands of others who applied for a shot at wrestling stardom - men twice his size, men who can perform a back-flip quicker than a hiccup, or have been wrestling independently at carnivals and in town halls.

"The try-out was tough, but luckily I'd been doing pre-season so my fitness level was high," he said. "Agility-wise, I was quite good, going against people who were bigger and heavier.

"Port Vale goalkeeping coach Mark Grew and Burton's Kevin Poole probably don't know how much they helped me - they'd had me doing fast feet, ladder drills and plyometrics every day for the previous couple of years."

Tomlinson went back to Burton, but had done enough to impress the WWE and stayed in touch for the next year.

In July 2013 he decided he no longer wanted to battle a knee injury and retired from football at the age of 28. Five months later, he signed a three-year deal with the WWE and moved to Orlando to join their developmental arm, NXT.

'You have to engage with the audience'

The Florida lifestyle was already a world away from diving around at Burton's Pirelli Stadium - "the sun is shining every day, I'm not on a pitch where it's raining and you've got fans calling me fat" - but his new training regime provided Tomlinson with another culture shock.

"A basic day at football would be train for an hour, maybe play a bit of five-a-side, have a laugh and a joke, then go home," said Tomlinson. "In a day, I would probably do two hours' work - an hour's training, an hour in the gym, then the rest would be free time.

"Now, a normal day would be wrestling for two or three hours - learning techniques, new moves, getting comfortable with what you're doing.

"You'd have a break for dinner, then do some weightlifting or power work for an hour or two, then we'd usually have a promo class for an hour."

For those unfamiliar with the theatre of pro wrestling, the promo is where the performer tells the crowd just how good he is. Think the braggadocio of a less controversial Tyson Fury, but solo in the middle of the ring, trying to tell a story to thousands of restless fans.

"Getting interviewed after a match stood me in good stead, especially when you're getting asked dodgy questions about losing 5-0 and it's all your fault," he said.

"You have to engage with the audience. If you are confident in your delivery, people will believe it."

'Hugo is a little more amplified than myself'

His previous career not only helped Tomlinson with his oration, but gave him the confidence to put on a staged fight in front of packed arenas. After all, this is a man who played at Wembley, winning the FA Trophy with Barrow in 2010.

"I've not been fazed, maybe because I've played football in front of big crowds," said Tomlinson. "I've seen people try out in front of just their peers and they would struggle. 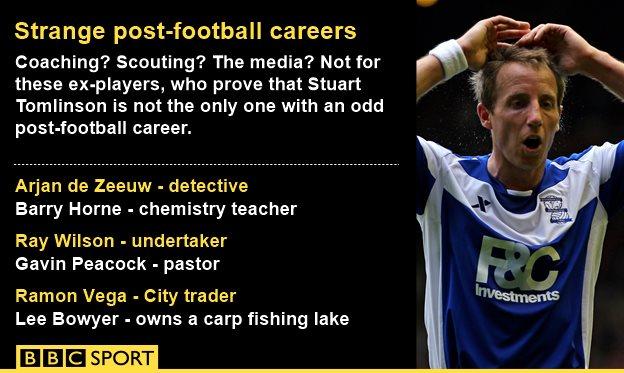 "I've always been fairly confident in my own ability to do something, ever since I was young. If you walk into something and you're not confident you will achieve, then you probably won't."

Confidence is what brings Tomlinson to his character, his alter-ego. He performs under the name Hugo Knox - a name chosen from a list of five he was given - in those polka dot trunks.

"Hugo Knox is a lively, high-energy and bubbly guy," he said. "On my way to the ring I'll be dancing my socks off, but when the bell goes then it's time to get down to it.

"The gear you wear in the ring is totally up to you. I went with the polka dots. Someone suggested toning it down, but there's no point training every day if you're going to cover it up. I want the smallest polka dot pants possible!"

'I was a semi-decent footballer'

Tomlinson speaks with the enthusiasm of a man who loves his new career, and appreciates the opportunity that a life outside football can offer.

"It's naive if someone thinks they are going to play football for the rest of their lives," he said. "Sometimes people get brainwashed in that whole football scene and a lot struggle to find work after they have been playing.

"People who make a career out of football are very lucky, but it was drummed into me from a young age by my mum and dad that it wasn't the be-all and end-all and I should always have other opportunities, to look outside the box."

The message got through. What began as a love for lifting weights in the gym led to the modelling, which in turn led to wrestling and ultimately, a new identity.

"I was a semi-decent footballer, respectable," he concluded. "I probably didn't achieve what I wanted to achieve, but I had good fun doing it.

"Within a year of training to be a wrestler, I have performed in front of thousands of people. I watched this year's Wrestlemania, where the crowd was 80,000, and I want to perform on those big stages.

"I would like to be remembered as one of the better wrestlers to come out of England. They might also say I was a footballer too."