Van Gaal's side laboured to a 1-0 FA Cup third-round win over Sheffield United - failing to score a first-half goal for the 10th home match in a row.

"There just seems to be an acceptance of bad performances," Scholes, 41, told BT Sport.

"Every time you come to Old Trafford you see negative football."

Manchester United are fifth in the Premier League but have scored just 12 goals in 10 home matches.

By the time Wayne Rooney netted an injury-time winner from the penalty spot against the Blades, thousands of fans had already left the stadium in what appeared to be a show of disapproval. Their team did not register a shot on target until the 69th minute, and that was greeted with ironic applause. 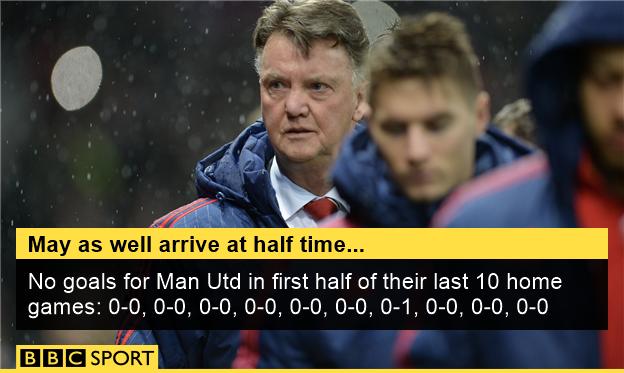 "The players looked bored themselves," Scholes said. "There's no spirit, there's nobody having a go at each other, there's no smiling, there's no entertainment.

"I think even Van Gaal on the bench looks bored, but he'll come out and say he's happy.

"People need digging out sometimes. You need to make something happen."

While Van Gaal's side avoided a replay thanks to Rooney's late penalty, Scholes said the performance was unacceptable.

"They didn't create a chance and had to win a game against a League One side with a penalty in the 94th minute," said the former England midfielder, who made 718 appearances for United.

"In my eyes it's not good enough."

Van Gaal, who has been criticised by fans for his possession-based approach, defended United's performance.

"It's always difficult to play against such an opponent with 10 or 11 players behind the ball," he said.

"It's more easy to defend than attack and at the end we got the penalty but it was a deserved penalty.

"We won this match and that's the most important thing."