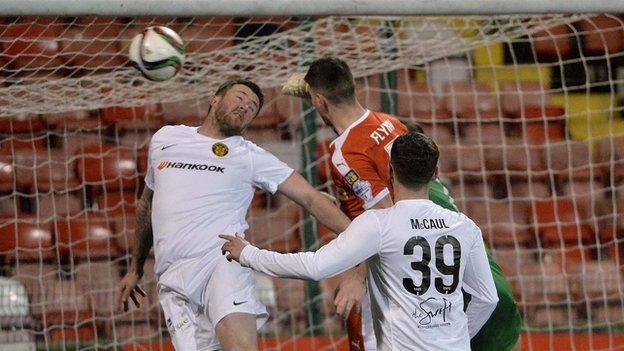 Cliftonville squandered an opportunity to move into second place in the Irish Premiership as they could only manage a 3-3 home draw against Carrick Rangers.

Johnny Flynn gave the Reds a seventh-minute lead but goals from Aaron Harmon and Brian McCaul put Rangers ahead by the 27th minute.

James Knowles levelled from a penalty on 80 as the Reds dominated thereafter.

Knowles had seen a 78th-minute effort superbly tipped on to the woodwork by Carrick keeper Brian Neeson but Carrick claimed that there was minimal contact on the Reds midfielder in the penalty incident as he ended up on the turf before getting up to slot the spot kick.

Cliftonville stay third in the table as Linfield retain second spot on goal difference from the Reds with leaders Crusaders remaining six points clear and with a game in hand on their two closest title rivals.

Tuesday's game was one of the backlog of fixtures faced by Carrick following their numerous pitch difficulties in recent months.

Rangers remain 11th after the draw but they have at least two games in hand on all the other strugglers near the foot of the table.

Flynn nodded the Reds into the lead on seven minutes as he connected with a Knowles corner but headers from Harmon (22) and McCaul (29) helped Carrick take a surprise lead after fine crosses from Aaron Traynor and Miguel Chines.

Cliftonville raised their tempo after the resumption with Chris Curran twice going close before Neeson tipped Knowles' 78th-minute effort on to the woodwork.

The levelling penalty came two minutes later as Carrick held out during the remaining 10 minutes to earn a point.