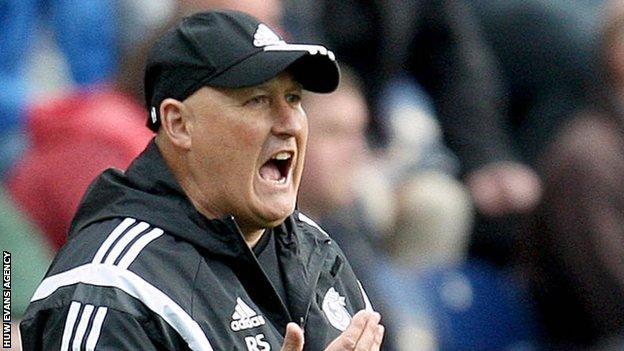 The Bluebirds are seven points adrift of the Championship play-off places and have been placed under a transfer embargo.

Slade has insisted he is still the man to lead the club but Dalman says his position is under scrutiny.

"He knows the pressures; he's done this job before," Dalman said.

"Russell knows the score. I talk to him on a regular basis and he knows what's ahead.

"He has been here for a while with us and of course his position comes under scrutiny, it always has been. To say it never has been would not be true.

"The jury's out on every single one of us every time we have to deliver something."

Cardiff have been placed under a transfer embargo by the Football League following a breach of Financial Fair Play rules.

The Bluebirds have become the fourth Championship club currently under a transfer embargo, joining Bolton, Fulham and Nottingham Forest.

The embargo will be in place for the rest of the January transfer window.

Slade confirmed he had spoken with club owner Vincent Tan but said there would be no talks over a new contract for him this month.

The former Leyton Orient manager says Tan is still as committed as ever to the club and denied suggestions the Malaysian's scaling-back of club finances showed a lack of backing.

"You see bigger clubs building castles and thinking the investment they put in will give them a great chance, but it doesn't guarantee it," Slade said.

"You've got to cut your cloth accordingly. There are rules in place."

Slade continued: "You can't just go spending £5m here or there. Whatever we do it will have to be under financial constraints."