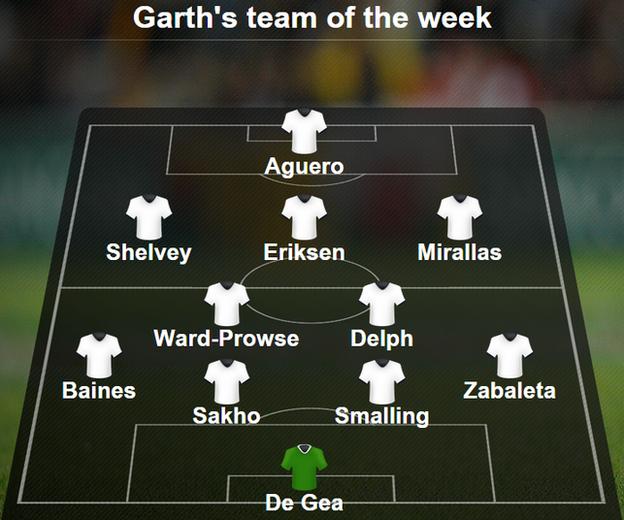 Arsenal finished the weekend top of the table after a goalless draw at Stoke.

Manchester United won at Liverpool while Manchester City maintained their title challenge with a comfortable win against Crystal Palace.

Chelsea left it late to snatch a point at home to Everton and Newcastle moved out of the relegation zone by beating West Ham.

But who were the outstanding performers? Here are my selections.

Petr Cech and Jack Butland were superb in their respective fixtures but if you want to know why Real Madrid are still chasing David de Gea you need look no further than his performance for Manchester United against arch rivals Liverpool.

He made two world-class saves from Emre Can and that was what galvanised United and proved the springboard to victory. The shot from Can on the edge of the box was travelling like a bullet and it took a very athletic De Gea at full stretch to pull off the save.

It is still a mystery why Real Madrid failed to land the much sought-after Spanish keeper but, whatever it was, with De Gea in goal a top-four finish for United seems almost guaranteed.

I watched Leighton Baines stroll through Chelsea's game against Everton with an authority that suggests he is back to his best again.

I selected Baines for my team of the week in December against Norwich when I said that, with Luke Shaw injured, he is a must for Roy Hodgson's England starting XI at the European Championship in France. My position has not changed.

Strangely enough, Everton should have won that game comfortably as well. Everton were so much better than Chelsea, who got away with a result through a dodgy equaliser that should have been ruled offside.

If "money can't but you Stones" - the Everton fans' artistically crafted take on the Beatles classic 'Can't buy me Love', and the best fans' song this season - what must Baines be worth?

It's great to see Pablo Zabaleta back in action for Manchester City again after such a long lay-off. I knew it was him when I saw City's right-back in the opposition's penalty area.

What was also clearly noticeable against Crystal Palace on Saturday was the immediate rapport Zabaleta seemed to have with Kevin de Bruyne down City's right-hand side.

Zabaleta is going to be a very important addition for Manchester City during their title challenge in the second half of the season. Manager Manuel Pellegrini might have timed the Argentine's return just right.

In a team that seems to struggle when they don't defend in numbers, Chris Smalling appeared to keep Manchester United composed under extreme provocation at times.

Admittedly United have a world-class goalkeeper who would make any defence feel like Fort Knox, but Smalling provided the extra security.

It was a pity this lad was on the losing side.

Mamadou Sakho made a superb tackle on Manchester United's Anthony Martial on the edge of his own box when everyone seemed to be screaming penalty. There were occasions in this fixture when Manchester United looked particularly dangerous and when they did Sakho was equal to it.

However, at the other end of the field Liverpool lacked cutting edge, so the fact Liverpool boss Jurgen Klopp refused to play a proven goalscorer like Christian Benteke against Manchester United is a complete nonsense to me.

Maybe this latest defeat will provoke Sakho and others in the dressing room to ask Klopp the question: "Why the blazes do you leave us in a game of such importance without a recognised goalscorer?"

I thought that the move to Manchester City came too soon for Fabian Delph but there is no doubt that the England international is starting to make an impact at City.

Against Crystal Palace he was making decisions that suggest he is growing in confidence among a group of players that will stretch his talents.

If Delph can continue this sort of form, and in this company, he could find himself not simply winning trophies but playing a central role in England's European Championship campaign.

James Ward-Prowse had only scored twice in 114 matches and he had doubled his career tally in just 30 minutes for the Saints against a very ordinary West Brom. His first goal was a beautifully taken free-kick and his second was a penalty that he looked so comfortable scoring he could have done it in carpet slippers.

However it looks like manager Ronald Koeman has bowled himself into a selection nightmare. With Shane Long in good form, Graziano Pelle still to return and Dusan Tadic and Ward-Prowse scoring goals, it will be very interesting to see where he plays new signing Charlie Austin.

Austin can score goals but not without a particular type of service. The other players mentioned have more than goals to their repertoire - so it looks like Sadio Mane could be on his way.

What a ball from Jonjo Shelvey for Daryl Janmaat to cross for Georginio Wijnaldum to score in Newcastle's win against West Ham. Paired in the centre of midfield, Shelvey and Jack Colback look capable of transforming Newcastle's season.

However there was also a real dark side to Shelvey's performance when he appeared to take West Ham's Enner Valencia out of the game, which suggests to me that Shelvey is prepared to do whatever it takes in order to win a football match.

The only problem with tactics like that is they can win or lose you matches.

I saw Tottenham on Wednesday night against Leicester City and they were ordinary. Against Sunderland they were not much better but the Black Cats are struggling at the foot of the table and it showed.

Fortunately for Spurs they have the capacity to produce a touch of class on occasions and when they do it's normally Christian Eriksen who is at the heart of it. Whether he scores goals or not (and he got two on this occasion) he's the sort of footballer fans have no problem paying decent money to see.

Conversely, I don't think I've seen a worst start to a Premier League debut than I saw from Sunderland's Jan Kirchhoff. He certainly made an impact, I'll give him that.

The Everton man forced his fellow Belgian to produce a fine save in the first half having turned Kurt Zouma like a spinning top prior to the strike.

Mirallas really should have had a hat-trick in this game, but his contribution to this impressive Everton performance was clearly evident.

I was desperately disappointed with Sergio Aguero's performance against Leicester when he didn't seem to relish the battle against enforcers Robert Huth and Wes Morgan.

It seemed, however, that Crystal Palace's Scott Dann and Damien Delaney were not as formidable as Huth and Morgan, who didn't offer Aguero anything like the respect presented by those two. That said, Palace were completely overrun by City and the Argentine had two goals put on a plate for him.

However, what I find interesting at City is what are they going to do if Pellegrini wins the FA Cup, League Cup and the Premier League title? It is quite feasible - so will Pep Guardiola be welcomed with open arms then? I wonder what Aguero and his team-mates would have to say about that.