For the first time in 13 years, Swansea City are involved in a relegation battle.

Only a 4-2 win over Hull on 3 May 2003 stopped the south Wales club from dropping out of the Football League.

Three promotions and more than a decade of steady growth later, slipping into the second tier would arguably be no disgrace, given how far the Swans have come.

But there is a lot more than just pride at stake as they battle to avoid relegation from the Premier League this season.

Why? Because with the improved television deal that kicks-in from the 2016-17 season, can any club afford to go down?

And as Deloitte's Football Money League report features 17 Premier League clubs in its top 30, the reported 26th-richest club in the world, Swansea, desperately want to stay in the top flight.

And that excludes the money Premier League teams will receive for overseas television rights, which could be worth an additional £2bn in the current deal.

As a result, the money clubs will receive for simply being in the Premier League from next season is set to increase on an astonishing scale.

Last season's bottom club, Queens Park Rangers, were paid £68m over the course of last season, but in May 2017 the team finishing bottom can expect to receive around £100m - Chelsea received "just" £99m for winning the league in 2015.

For Swansea, the potential ramifications of missing out on such large sums of money would be huge.

For one thing, aspirations to develop and own the Liberty Stadium could go on hold and, inevitably, many of the players would be likely to move on.

However, the effect on the local economy could be even more significant, in an area already hit by the news of 750 jobs being lost at the Tata Steel plant in the nearby town of Port Talbot.

According to a study by the Welsh Economy Research Unit on Swansea City's promotion to the Premier League in 2011, their first season in the top division created an estimated 420 jobs - 120 of them in the hospitality industry.

The hotel consultancy service PFK reported a 9% increase in overnight stays in the area and Swansea council reported that activity on its 'Visit Swansea' website was up 44% on the previous year.

Swansea University then saw a significant increase in applications since the local football club joined the elite clubs, a fact vice-chancellor Professor Richard B Davies attributed to Premier League football "putting Swansea on the map".

Emma Frearson Emmanuel, head of the International Office at Swansea University, said: "We have seen a 50% increase [in applications] over two years.

"What we can't say is how many people apply to us directly because of the Swans, but certainly having a Premier League club in the city has been a big help, particularly internationally.

"The Korean footballer Ki Sung-Yueng [Swansea midfielder] has an incredibly high profile in Korea, so obviously factors like that also raise awareness of the city abroad." 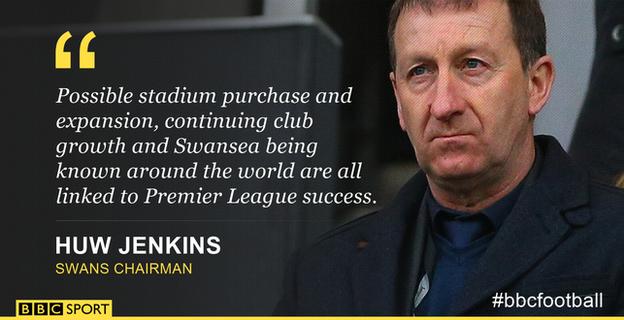 That Swansea now generate more revenue than former European Cup winners Ajax and Benfica highlights the financial power of being in the Premier League.

The money the television deal of 2012 brought has seen a huge change in the liquidity of top-flight clubs.

Paul Rawnsley of Deloitte's Sports Business Group, who has been involved with the analysing football finance for 15 years, added: "There has been a sea change in recent years with Premier League clubs becoming collectively profitable for the first time."

This is partly due to the fact that Premier League clubs are now only allowed to post limited losses under Uefa's Financial Fair Play requirements.

But the guaranteed income of next season means this year's Championship play-off final, already the most lucrative one-off fixture in world football, will now be worth even more to the winners than the £90m earned by 2015 winners Norwich.

Is Guidolin the man?

After a lengthy search to replace Garry Monk in which Jenkins travelled to South America in search of candidates, Swansea have opted to appoint Italian Francesco Guidolin as head coach.

The former Udinese boss, who will take charge of the Swans for this first time at Everton on Sunday, is a new face for the Premier League.

His task is to keep the club in the top flight, at the expense of experienced Premier League managers such as Sunderland's Sam Allardyce and Newcastle's Steve McClaren.

Jenkins has often been praised for getting his managerial appointments right - he will now desperately hope this season's unplanned change of first-team boss does not end up costing the club several tens of millions.