Newcastle striker Aleksandar Mitrovic says he is playing some of the best football of his career in the Premier League, despite not yet matching his Belgian league goalscoring form.

The 21-year-old joined the Magpies from Anderlecht for £13m in July 2015, having scored 36 goals in two seasons.

"It's much more difficult than the football I've played before," Mitrovic told BBC Newcastle.

"I've played some of the best football in my life, the difference is in Belgium I played well and scored goals.

"Here, I play good but the goals don't come - but I will keep working and hopefully one day it will come."

The Serbia international made in inauspicious start to his Newcastle career, with one red and three yellow cards in his first six games.

It prompted boss Steve McClaren to warn the former Partizan Belgrade forward about "emotional control", something he has taken on board with just one further yellow card at club level.

Mitrovic himself has been impressed with the support at St James' Park, which he says is even more fervent than in his native Belgrade.

"Football here is like a culture, a religion, every game the people know they will be at the stadium, before the game in the pub," he continued.

"Every game it's a full stadium and it's an amazing place to play and to score goals."

The goals of Aleksandar Mitrovic 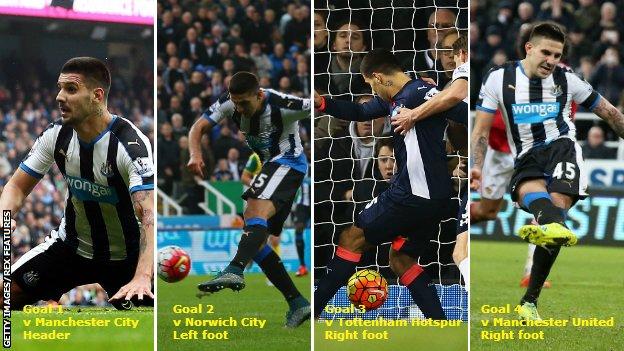