Manchester United and Manchester City will compete to sign Neymar, 23, from Barcelona, with the Brazil forward set to earn £15m a year. (Gazzetta World)

United are also closing in on Benfica midfielder Renato Sanches, 18, with the Red Devils expected to pay about £30m. (Daily Mail)

Manchester City striker Sergio Aguero has spoken to Barcelona forward Lionel Messi, 28, about the positives of the city. (Sky Sports)

Meanwhile, City manager Manuel Pellegrini is not expecting any signings or sales in January - but 18-year-old forward Patrick Roberts could go out on loan. (Manchester Evening News)

The Reds remain in negotiations with Ukrainian club Shakhtar over Teixeira, and are considering raising their initial offer of £24.6m for the Brazilian. (Guardian)

Chelsea have made an approach to Paris St-Germain over a potential deal to sign their 31-year-old centre-back Thiago Silva this summer. (Tuttomercatoweb - in Italian)

Meanwhile, Chelsea have made Juventus boss Massimiliano Allegri, 48, their top target to take over as manager next summer.(Sun)

Manchester United boss Louis van Gaal plans to make a move for Southampton's 26-year-old left-back Ryan Bertrand, but might have to pay over £20m.(Daily Star)

United could move instead for former Chelsea and Arsenal left-back Ashley Cole. The 35-year-old is available on a free after leaving Italian club Roma.(Independent)

Crystal Palace will have to pay unattached 31-year-old striker Emmanuel Adebayor £77,000 a week if they want to sign him before the transfer window closes. (Mirror)

Tottenham winger Andros Townsend, 24, is desperate to move to Newcastle and West Brom forward Saido Berahino, 22, sees the switch to St James' Park as progression, but potential deals for the pair have hit snags. (Newcastle Chronicle)

West Brom boss Tony Pulis says there have been no bids for Berahino, and has told the player to forget the "circus" of the transfer window. (Daily Star)

Former QPR and Tottenham midfielder Adel Taarabt, 26, is closing in on a return to AC Milan after falling out of favour at Benfica. (O Jogo, via Talksport)

Chelsea have sacked one of their stewards after video footage emerged of him branding 28-year-old midfielder Cesc Fabregas "a snake". (Irish Independent)

However, Defoe says he "doesn't think I could celebrate - just out of respect" if he scores on Saturday against Bournemouth. Defoe made his name with the Cherries as an 18-year-old on loan from West Ham, scoring in his first 10 league games as a professional.(Daily Star)

This was Cristiano Ronaldo's view on Friday afternoon - the 30-year-old Real Madrid forward posted the picture above on his Instagram page with the simple caption: "Relaxing."

Meanwhile, John Terry was settling in for an evening in front of the TV. The 32-year-old Chelsea centre-back posted this message of support for the club's youngsters: "Watching the U18s in the FA Youth Cup against Man Utd. 2-0 so far hopefully the boys can have another good year."

Striker Kenwyne Jones, on loan from Cardiff, celebrated making a goalscoring debut for Al Jazira by retweeting dozens of comments praising him. 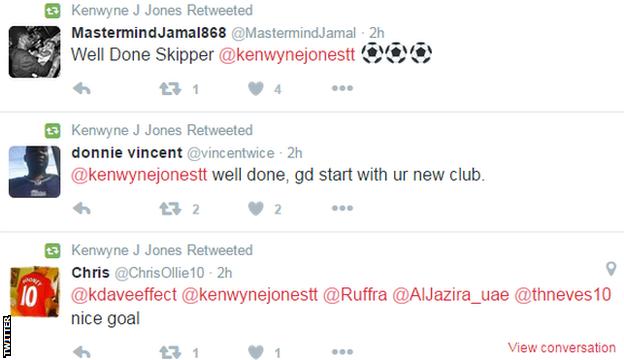 An Arsenal-supporting father faked an official letter from Arsene Wenger to trick his son into supporting the Gunners. (Metro)