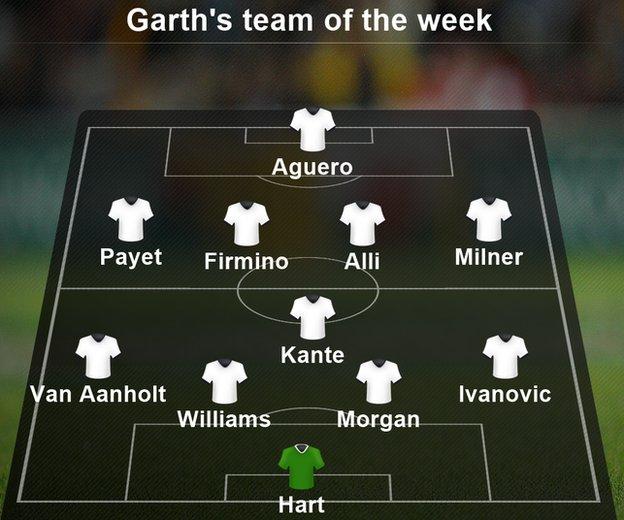 Leicester have a three-point lead at the top of the Premier League after Saturday's 3-0 victory over Stoke.

Behind them, heavyweights Manchester City and Arsenal both slipped up in their pursuit, with Tottenham gaining ground on the duo with a 3-1 win over Crystal Palace.

Joe Hart's save from West Ham midfielder Dimitri Payet's free-kick was a bit special. It's just as well the England number one has been one of the few consistent performers for Manchester City this season. The difficulty for manager Manuel Pellegrini has been that he can't determine which of his City stars are likely to turn up and give a top-class performance.

It would help of course if they could all provide what he knows they are all capable of at the same time. Meanwhile, Hart has been the constant performer in a defence that, without Vincent Kompany's leadership, has been all over the place. His save from Payet provided City with a point I'm not entirely sure they deserved.

Why do I detect a renewed calmness about Branislav Ivanovic and his Chelsea team-mates, particularly in the big games at the moment? I'm convinced that much of it is due to the arrival of manager Guus Hiddink.

They say a manager is only as good as his players. Make no mistake, players like Ivanovic, Cesc Fabregas and Nemanja Matic are all good players but they all lost their confidence under former manager Jose Mourinho. They seem to have regained it just as quickly under Hiddink. Perhaps Hiddink is 'The Special One' and not Mourinho after all.

Here is a player who gets my vote for Leicester's player of the season. Wes Morgan seldom misses games, is dependable and should Leicester win the title - I don't think they will - Morgan would be my player of the year.

However, as it stands he is having an amazing season, and long may it continue.

If I heard the commentator remark "and away again by Ashley Williams" once he must have said it a dozen times.

The Wales international was like a rock for Swansea and he needed to be against a very determined Everton. Midfielder Gerard Deulofeu and Seamus Coleman terrorised Swansea in the second half, but none of that seemed to bother Williams.

It's not very often you see lightning strike twice in the same place, but it would appear that's precisely what has happened in Patrick van Aanholt's case.

The Sunderland full-back, who has an insatiable appetite for getting forward, has now scored two almost identical goals in a matter of weeks. His goal against Bournemouth earned his side a valuable point unlike his strike against Tottenham at White Hart Lane. But both goals were beauties.

In a team where Jamie Vardy and Riyad Mahrez have collected the vast majority of the headlines in this remarkable season of Leicester's, the unsung hero is without doubt N'Golo Kante.

The Frenchman has been superb this season and runs for fun. Rather like Chelsea's Jon Mikel Obi, or former Blue Claude Makelele, Kante makes wonderful interceptions but also has the ability and desire to cover so much ground.

Former Aston Villa boss Tim Sherwood said on Match of the Day that if Kante could add goals to his game he would be playing for Real Madrid. I can't remember Makelele being prolific - and he did wear the famous white shirt.

It's official - Roberto Firmino has come good. The Brazilian is starting to look like a £29m player at last, which is just as well, considering that's what he cost.

To be fair to the Brazilian, he has adapted to the pace and rigour of the Premier League quicker than most foreign players I've seen and in a Liverpool team that frankly is no better than when Brendan Rodgers was in charge. In fact it may have regressed.

At 3-1 down at Carrow Road Liverpool looked dead and buried against a Norwich side who really should have put Liverpool to the sword. New signing striker Steven Naismith looked impressive and manager Alex Neil looked a genius for buying him.

James Milner was an impressive individual at Manchester City and he is proving to be just as inspiring at Liverpool. As far as professionals go they don't come much better than him.

In the craziest game of football I've seen in years, Milner played a pivotal role in Liverpool's comeback to win 5-4 against Norwich. He missed a glorious opportunity to put Liverpool 2-0 up in the early stages of the fixture, but he never allowed the moment to interfere with his game.

He seldom moans about the injustices on the field of play and you're always guaranteed a performance. Not a bad person to have around the place if you're a manager in need of some moral fibre in your dressing room.

Football goes through phases where we occasionally see the ingenuity of someone like former Manchester United player Eric Cantona sacrificed for the work ethic of ex-Chelsea midfielder Didier Deschamps.

However, I can assure you that no such anomaly will be displayed at Upton Park on manager Slaven Bilic's watch. It was Bilic who enticed Dimitri Payet, who has all the creative flair of a Cantona, to West Ham (much to the delight of the fans) when the player could have served his time playing Champions League football elsewhere.

Payet was excellent against Manchester City, and is a throwback to all the ball players who have graced this great game and given the football fan hours of wonderful entertainment.

Well, I've seen some glorious goals scored in my time watching football matches but I doubt whether I will see a goal scored with such individual flair, and by a 19-year-old, as Dele Alli's goal at Selhurst Park - it was sheer class.

Now, here's the thing. Spurs have unearthed a gem in Alli and have an exceptional striker in Harry Kane. However, the question I pose is: are Spurs prepared to ignore the obvious requests that are bound to come in from clubs with deep pockets, now and in the future, and seriously build on the squad they have and go for the title everyone keeps telling me they are capable of winning?

Manchester City boss Manuel Pellegrini must be so relieved that Sergio Aguero is coming back to his best form. The Argentine has blown hot and cold this season, but currently is showing his normal assassin-like coolness in front of goal.

There is no doubt that we only see glimpses of what City are truly capable of and they are certainly suspect at the back. However, it's Aguero who is providing the weaponry to retain their interest in the title.

What must concern Arsenal, even if they won't admit it, is that if City can get Yaya Toure, David Silva, Raheem Sterling and Kevin de Bruyne, not to mention Vincent Kompany, at the top of their game and all playing with Aguero at the same time, The Gunners' chances of winning the title could be in tatters.