Imagine Rickie Lambert returning to boyhood club Liverpool again, establishing himself as their first-choice striker and being more prolific than he ever has been.

Struggling to picture it? Fair enough.

Many Athletic Bilbao fans would also probably have laughed if you suggested a few years ago that Aritz Aduriz would be mentioned in the same breath as Lionel Messi, Cristiano Ronaldo and Luis Suarez.

But he is. The soon-to-be 35-year-old has gatecrashed the Spanish top-flight's goalscoring charts, netting more than Messi, Suarez, Karim Benzema and Neymar this season.

Aduriz bagged a brace in Sunday's 5-2 home win against Basque rivals Eibar, taking his personal tally to 25 goals in all competitions this season.

Real Madrid superstar Ronaldo is the only Spanish-based player to have scored more (although admittedly Messi, Suarez, Benzema and Neymar all have superior goals-to-games ratios to Aduriz).

But it is not just Aduriz's sheer volume of goals that has caught the eye.

The athleticism, audacity and astonishing execution of his spectacular bicycle kick against Eibar has staked his claim for Spain's goal of the season - and put his name on the lips of many La Liga lovers.

Head to your favoured internet search engine now - you have to watch it. It's similar to Christian Benteke's goal against Manchester United earlier this season.

Finally out of the shadows

How has Aduriz managed to join La Liga's goalscoring aristocracy? Through patience and opportunism.

He returned to Athletic Bilbao for a third spell in 2012, having failed to make an impression as a youngster - spending two-and-a-half seasons in the second tier with Burgos and Real Valladolid - and finding his first return between 2005 and 2008 hampered by Fernando Llorente's presence.

Athletic's preference to play Llorente as a lone striker meant Aduriz had few opportunities, seeking regular football at Mallorca and Valencia instead.

But another well-known Spain international, Roberto Soldado, stopped his progress at the Mestalla, paving the way for a return to Bilbao.

Llorente again threatened to block Aduriz at San Mames, only for his contractual stand-off and subsequent move to Juventus opening the door.

And Aduriz's 87 goals in 161 matches have made Athletic's 2.5m Euro (£1.9m) move for their previously-unheralded striker look like a steal. 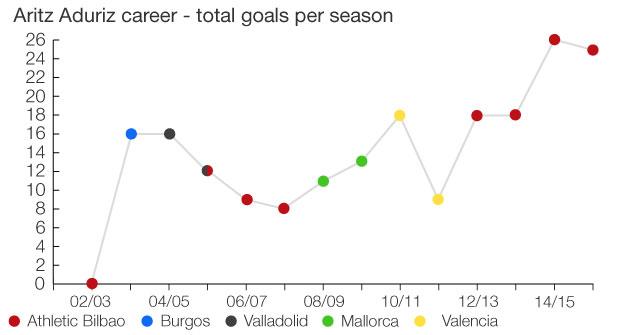 Not only is Aduriz proving a menace to Spanish defences - he is also causing bother in Europe.

Six goals in the Europa League group stage makes him the joint leading goalscorer in the continent's secondary club competition. 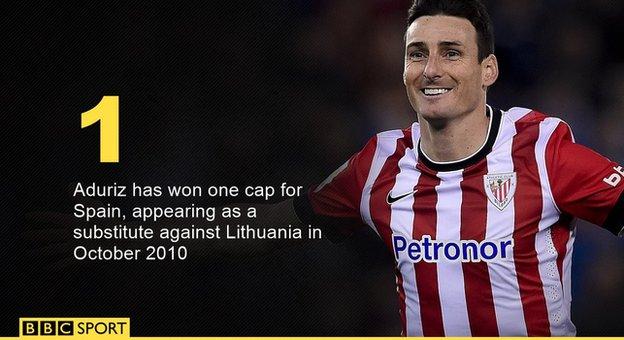 Back in December, Spain coach Victor Del Bosque appeared to be fed up of being asked about Aduriz's chances of an international call-up.

"He might or might not get one in March, but until then it's all speculation that really doesn't count for much," he snapped. "We can't call anyone up to the squad in December or January."

But Aduriz's hopes of a recall received a boost recently when the veteran boss described him as "fantastic".

"I am flattered that Vicente del Bosque, whom I like both as a person and as a manager, has remembered me," said Aduriz.

Del Bosque says he is considering a number of attacking options ahead of the pre-Euro 2016 friendlies against Italy and Romania - but the numbers stack up in Aduriz's favour.

So, how about it Jurgen... why not give Rickie Lambert a call? 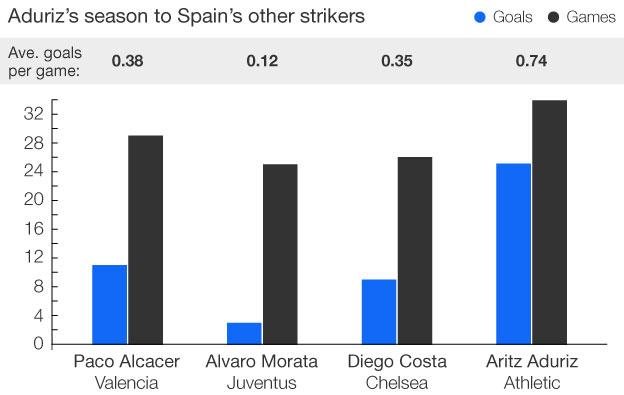 "Aritz Aduriz has always been popular with Athletic Bilbao fans, so he was well received when he returned for his third spell with the club in 2012.

"But even his biggest admirers have been pleasantly surprised by his goalscoring exploits in the last couple of years, which have easily outstripped anything he achieved earlier in his career.

"He has become the club's emblematic player, adored by the fans and hugely respected by opponents, and further cemented his place as an Athletic legend by scoring a hat-trick in August's Super Cup thrashing of Barcelona, sealing the club's first trophy since 1984.

"Aduriz's greatest strength is his aerial ability, which is guaranteed to give opposition central defenders a tough encounter and has seen him score some spectacular headed goals.

"He's also a proficient finisher with his feet, possessing the knack of creating space for himself to shoot, and is an extremely hard-working team player who leads by example with his efforts in closing down defenders."