Manchester United manager Louis van Gaal, 64, offered to resign on Saturday after the 1-0 defeat by Southampton - but was talked into staying by executive vice-chairman Ed Woodward. (Sun)

Dutchman Van Gaal has been in the Netherlands for his daughter's birthday, and will hold more talks with Woodward when he returns on Tuesday. (Guardian)

Woodward has spoken to several United players - as well as other senior figures at Old Trafford - about Van Gaal. (Sky Sports)

However, he is ready to defy public opinion and back Van Gaal to stay on as manager. (Mirror)

Journalist Miguel Delaney says United are well aware former Chelsea boss Jose Mourinho, 52, wants to succeed Van Gaal, and that talks have been ongoing between his representatives and the club for some time. (BBC Radio 5 live)

Tottenham winger Andros Townsend, 24, looks set to complete a move to Newcastle after the two sides agreed a compromise over the fee. The Magpies' opening offer of £10m was turned down, with Spurs wanting £14m. (Guardian)

Spurs are worried key defender Jan Vertonghen, 28, may have suffered knee-ligament damage which would rule him out for the rest of the season. (Sun)

Newcastle will make a second attempt to sign 24-year-old Lyon forward Alexandre Lacazette after the striker backtracked on reports he is not keen on a move to Magpies. (Telegraph)

Liverpool have been unsuccessful in a £28m bid to sign Shakhtar Donetsk forward Alex Teixeira, 26, who has scored 22 goals in just 15 league games this season. (Mail)

West Brom are not interested in signing Liverpool's Italian forward Mario Balotelli, 25, with Serie A side AC Milan keen to end his loan spell. (Express and Star)

Newcastle's hopes of signing France striker Loic Remy, 29, from Chelsea rest on whether the Blues are able to recruit 26-year-old Brazilian Alexandre Pato from Corinthians. (Chronicle)

Sunderland have again been linked with a move for Roma and Ivory Coast striker Seydou Doumbia, 28, who has reportedly turned down a big-money move to China. (Sunderland Echo)

West Ham United have agreed terms with Nigeria striker Emmanuel Emenike, 28, but are yet to conclude an agreement with his parent club Fenerbahce or Al Ain in the UAE, where he is on loan. (Evening Standard)

Watford are moving closer to a deal to sign Fiorentina and Spain midfielder Mario Suarez, 28, who is keen on a switch to Vicarage Road.(Watford Observer)

Tottenham midfielder Erik Lamela posted a picture of him and his team-mates eating out during a training camp in Barcelona.

Microsoft founder and multi-billionaire Bill Gates visited Everton on Monday as part of BBC Sport Relief. The world's richest man could buy the club an estimated 245 times over with his £55bn fortune. 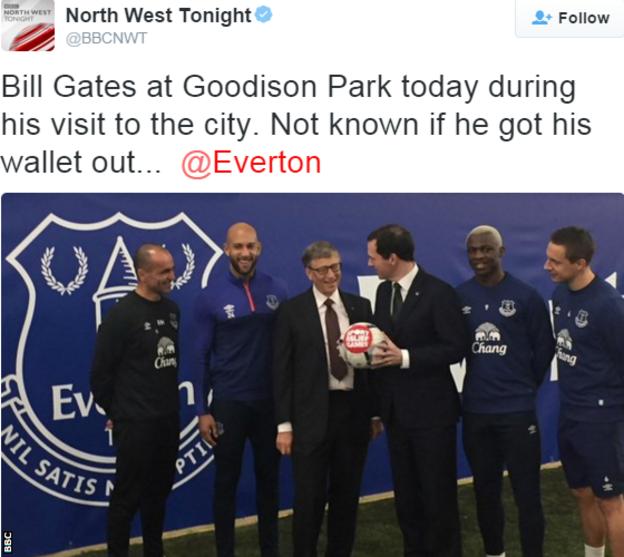 Tottenham boss Mauricio Pochettino says Espanyol were a "centimetre away" from signing Lionel Messi - then 17 - when the White Hart Lane coach was playing at the Spanish club. (Goal.com)