You do not need a search engine to tell you where Swansea's season was heading if their slump had not stopped when it did.

Before the start of last week, a run of just two wins in 17 Premier League games from the end of August had seen the Welsh side slip from fourth in the table to 18th.

The Swans turned to Francesco Guidolin to stop the rot, with skipper Ashley Williams making the headlines by admitting he had Googled the veteran Italian following his appointment.

Guidolin was in the stands to watch his new side beat Watford before taking charge for Sunday's win at Everton - Swansea's first back-to-back successes of the campaign.

Williams, who is playing under his seventh manager since he moved to the Liberty Stadium in March 2008, tells Match of the Day 2 what the last few days have been like - and where he hopes the club goes from here.

Guidolin was appointed as Swansea's third head coach of the season on 18 January. The much-travelled 60-year-old has never worked in Britain before but Swansea are his 14th club and only six men have managed more Serie A games than him. He has appointed Gabriel Ambrosetti as a coach, and the former Chelsea winger also acts as his translator.

Ashley Williams: "Just to clear things up, I did not have to Google Francesco to find out who he was, which is what some newspapers reported - I just did it to find out everything about him and his methods.

"I think that is normal. If there is someone you don't really know much about, you hit Google don't you?

"I know a little bit more now, though - he has made a really good impression at the club in his first week.

"He was really passionate and enthusiastic when he spoke to the whole squad for the first time and he is so animated, he has livened the whole place up.

"Francesco does not speak English so well but he is making the effort, which is nice to see, and when he has got an important point to make, [coach] Gabriele Ambrosetti will translate it.

"But, most of the time, even when he speaks Italian you know what he is saying anyway - because of his arm gestures, you kind of grasp what he is trying to get across."

'We're not used to being in a relegation fight'

Swansea finished eighth last season under Garry Monk - their best Premier League finish, and with their highest points total. This season, they were fourth under Monk at the end of August but he was sacked in December after a run of one point from 11 games had seen them slip to 15th. Alan Curtis replaced him, initially on a caretaker basis, and took eight points from seven league games in charge before Guidolin was brought in.

Ashley Williams: "It has been the toughest season I have had in my time here and, as captain, I definitely felt more responsibility for what was happening to the team, as well as trying to get things right with my own game.

"When results were going badly, I have been asking myself what could I have done differently, and how could I have led the boys better.

"We are not used to being in a relegation fight, and it was not nice seeing us drop down the table towards and then into the bottom three, but I just tried to keep everyone in good spirits and send out a positive message.

"We are on to our third head coach of the season now, which is obviously not ideal, but it is not an excuse either because as professional footballers we have all been through it before.

"You just get on with it, really. Whoever has got the title of manager or head coach, I give him my all, try to help him as much as possible and do exactly what he says."

'Guidolin has not changed much so far'

Williams was the first Swansea defender to score in 2015-16 when he found the net against Watford but goals remain a problem for his side and only bottom team Aston Villa have scored fewer in the league this season. The Swans have also struggled on the road - before they beat Everton, they shared the worst away record with Villa of six points from 10 games.

Ashley Williams: "Beating Watford was a perfect night for me really, because we kept a clean sheet and I scored the winner.

"It was my first goal since March 2014 but defenders scoring goals is something we have to improve on at Swansea, because the others don't get many either.

"Having the new manager watching that game definitely helped because everyone was trying to impress him - that is just human nature.

"When we met him, he told us he already knows us as players and how we play as a team, and he has not tried to change much so far. Instead he has just tried to tweak a few things - which I think helped against Everton.

"In that game he wanted us to win the ball a lot higher up the pitch if the time was right and I thought we did it pretty well, especially in the first half - with the way we won our penalty a prime example of that.

"I am sure as the weeks go on, he will try to implement some more different ideas, but that was the first thing he asked us to do, and it worked."

'We don't have a points target for survival' 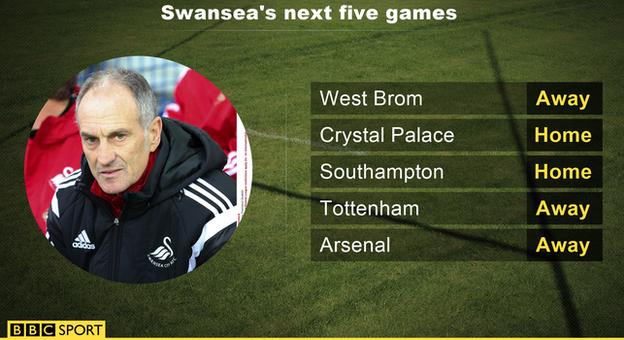 After 21 games, Swansea had 19 points and were 18th, their lowest points total and position at that stage since they were promoted to the top flight in 2011. After beating Watford and then Everton, they are four points above the relegation zone with 25 points from 23 games - no team with that total at that stage has ever been relegate since the Premier League was reduced to 20 teams in 1995.

Ashley Williams: "Our outlook has definitely changed over the past few days, and it is not all doom and gloom any more.

"The whole time we were on a bad run we knew we were the same players who did well last season, but you also need belief in yourself and the team to get back to the level you know you should be at.

"The table looked a bit better for us on Sunday evening after the Everton game so that is a big boost in itself, especially because we have a little break until we play West Brom next Tuesday.

"We have won two games on the bounce and got a big six points but we know our problems are not over and we have to push on.

"We have not set ourselves any points targets at all - for us now the challenge is about blocks of games, and trying to go as long as we can without losing, even if we do not win every time."

"Things are looking a bit rosier, but there is still a long way to go."