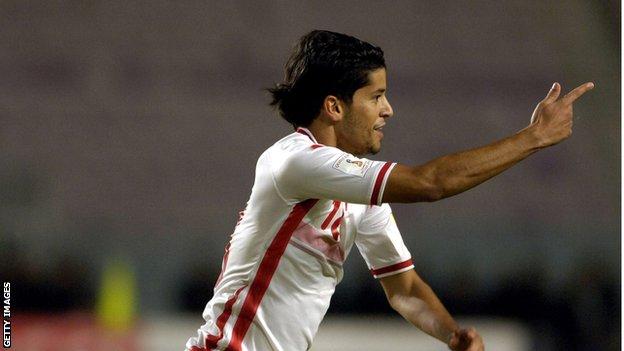 Nigeria were eliminated from the African Nations Championship (CHAN) in Rwanda following a 1-0 loss to Guinea, who progress to the quarter-finals.

Tunisia also advanced to the last eight as winners of Group C thanks to a 5-0 win over Niger.

Sunday Oliseh's Nigeria side needed just a draw to qualify but lost to a Ibrahima Sory Sankhon goal.

Esperance's Saad Bguir (pictured) scored a brace before half-time to set Tunisia on their way to victory.

Guinea's winner came on the stroke of half-time as Sankhon turned the ball in from the edge of Nigeria's the six-yard box.

After Guinea dominated the first half Oliseh tried to change things soon after the break when he brought on Elvis Chikatara.

But the man who scored four of Nigeria's goals at the tournament was unable to find the equaliser that would have taken his side through.

Bguir's first for Tunisia came after just four minutes with a low scuffed shot from just outside the Niger area.

The with five minutes until half-time defensive mix-up allowed Tunisia to get in behind the Niger defence and Bguir fired the ball into the roof of the net from a neat pull back.

Ahmed Akaichi added a third, and his fourth of the tournament, with 13 minutes left to play.

The rout was completed minutes with goals from Ali Maaloul and Hichem Essifi for coach Hatem Missaoui's side.

He is in charge of the team in Rwanda as Henry Kaszperczak is resting after undergoing surgery.