A goalkeeping emergency which ended with a 46-year-old putting on the gloves to keep a clean sheet headlines our round-up of Saturday's football action.

On another smorgasbord Saturday of action, it also proved to be 13th time lucky for a Championship struggler, the day a goal-shy midfielder hit a hat-trick, an assistant referee and manager hit the deck and a remarkable transformation continued.

Preparing for a comeback with a cup of tea

When Barry Richardson agreed to combine his role of Wycombe Wanderers goalkeeping coach with back-up keeper after number one Matt Ingram was sold to QPR, little did he think he would be playing eight days later.

But an injury to Alex Lynch early in their game at Plymouth left the Chairboys with a goalkeeping emergency on their hands and turning to the 46-year-old.

His appearance off the bench came more than a decade after Richardson broke his leg in his last match for Doncaster, and 27 years since he made his senior debut for Scarborough in 1989.

Richardson, older than both his Wycombe boss Gareth Ainsworth and Plymouth manager Derek Adams, had Argyle's press team scrambling to point out that the majority of their squad were not even born when Richardson first played at Scarborough.

Not anticipating he would be making his first Football League appearance since 2002, the veteran goalkeeper was even pictured having a cup of tea during the team's pre-game warm-up.

Despite the bizarre circumstances surrounding his introduction, he managed to help play-off chasing Wycombe overcome promotion hopefuls Argyle, who had previously netted in every home game this season, 1-0.

"The game is all about opportunity, and what an opportunity Barry Richardson has had this afternoon," Wycombe boss Ainsworth told BBC Three Counties Radio.

"He is now the oldest player to play for Wycombe, and not only did he keep a clean sheet but I think he is the first to do so at Plymouth this season. I won't be looking to start him next week though." 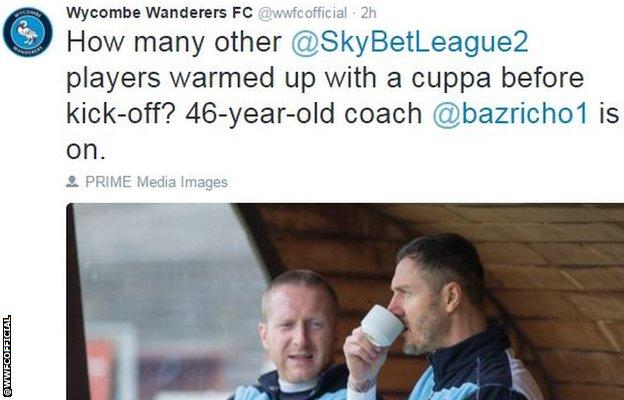 But while Wycombe celebrated their win, Plymouth's social media team were less than impressed:

Diving. It is part of the game. Some condemn it, others feel it is OK to take advantage where you can.

It would be interesting to get Graham Westley's take on simulation, as he proved he is as good at hitting the deck as anyone.

Westley gave a masterclass when, during the first half of Peterborough's 2-2 FA Cup fourth-round draw with West Bromwich Albion, his goalkeeper kicked a damaged and deflated ball out of play and inadvertently hit the Posh manager. Watch it here.

Theatrics followed, but Westley shook it off and sprang back to his feet.

However, there was a bit more cause for concern at Woking's Kingfield Stadium when a referee's assistant was forced off early on after the ball struck him in the face.

A Woking fan volunteered to take on fourth official duties after a lengthy delay and the game passed with no further major incidents as it finished 2-2. 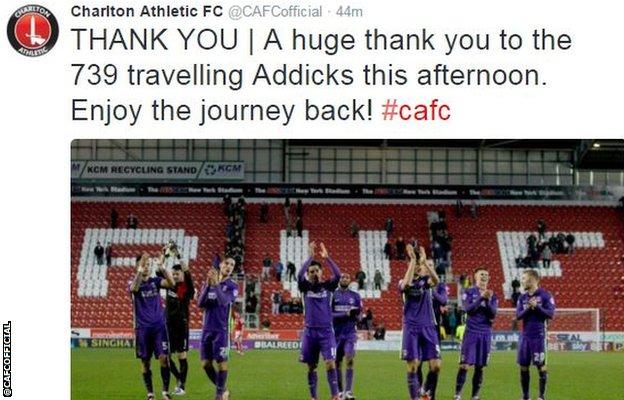 Charlton have featured in the Saturday round-up a few times in recent weeks for all the wrong reasons - battered one week, protesting the next.

Today, however, the Championship's second-from-bottom side are celebrating their first win in 13 games after easing past Rotherham United 4-1.

It was the first time in nine games that Charlton had managed to score more than once in a game, and last time they did that they were locked in a 2-2 draw with bottom side Bolton Wanderers.

The side which had not won since 21 November took the lead after just four minutes, Simon Makienok latching on to a Zakarya Bergdich cut-back pass to score.

While the Millers responded through Chris Burke, Igor Vetokele restored Charlton's advantage before Dane Makienok added his second and Ademola Lookman gave the 739 travelling Addicks fans reason to cheer for the first time in a long while.

The triumph will also come as a relief for Jose Riga, having been reappointed boss earlier this month.

Will the real Barnsley please stand up

Thrown away the gym membership yet?

Well, not everyone can stick to their New Year's resolutions as well as Barnsley have in recent weeks, beating Swindon 1-0 to extend their winning league run to six games, dating back to 28 December.

They are unbeaten in 2016, having also finished the first leg of the Johnstone's Paint Trophy Northern Area final against Fleetwood level at 1-1.

Before their surge in form the Tykes had picked up one win from their previous nine league games - losing nine of their 14 matches in all competitions between 17 October and Christmas.

Victory at the County Ground moved them up to 12th in the League One table and to within five points of the play-off places.

As demonstrated by Wycombe keeper Richardson, it was one of those days when the usually unassuming made a big impact.

Jack Compton scored all of Yeovil's goals in the 3-2 win over AFC Wimbledon, having previously not scored in the league for almost two years.

The 27-year-old had scored 11 times in his previous 166 career appearances.

But he is making a habit of scoring - by his own own standards - having also netted in Yeovil's FA Cup third-round replay defeat by Carlisle earlier this month.