Chelsea will move for Atletico Madrid's £60m-rated France forward Antoine Griezmann in the summer if their Belgium international Eden Hazard moves to either Real Madrid or Paris St-Germain. (Mail on Sunday)

United midfielder Michael Carrick, 34, could also be on the way out of Old Trafford. He is out of contract in five months and a number of Premier League and overseas clubs are keen to tempt him away. (Sun on Sunday)

The Old Trafford club's owners, the Glazer family, have demanded cuts behind the scenes with up to 15% reductions in most departments.(Sunday Express)

Newcastle are set to continue their January spending spree by offering £7m for Swansea's former France striker Bafetimbi Gomis, two years after having a bid for the 30-year-old rejected by their Premier League rivals.(Sunday Telegraph)

Stoke have called off a club record move for Porto's French midfielder Giannelli Imbula, 23, and turned down a £10m offer from abroad for their 28-year-old Senegal striker Mame Diouf.(Sunday Telegraph)

Leicester City are reported to have had a £11.5m offer accepted for Chelsea's France striker Loic Remy.(BeIN Sports, via Independent)

The Foxes are also thought to be targeting Crystal Palace striker Dwight Gayle, with Swansea having put in a £7m bid for the 25-year-old on Friday.(Sunday People)

Everton are believed to be close to signing Lokomotiv Moscow's Senegal striker Oumar Niasse, 25, for £13.5m as a potential replacement for their 22-year-old Belgium international Romelu Lukaku.(Sun on Sunday)

Fenerbahce chairman Aziz Yildirim says their Nigeria striker Emmanuel Emenike, 28, is on the verge of joining West Ham United on loan for the rest of the season.(Metro)

Newcastle's French winger Florian Thauvin, 23, is set to rejoin his former club Marseille after failing to settle in the North East.(Chronicle)

Tottenham are keen to make one final bid for West Brom striker Saido Berahino, 22, before the transfer window closes on Monday.(Sunday Mirror)

But Newcastle are preparing to make a club record £34m bid for Berahino.(Sunday Times - subscription only)

Bayern Munich boss Pep Guardiola's wife, Cristina, has been given a guided tour of St Bede's College in Manchester as the Spaniard moves closer to a summer switch to Manchester City. (Daily Star on Sunday)

West Brom defender Sebastien Pocognoli may leave The Hawthorns after the 28-year-old Belgium international emerged as a loan target for Championship side Wolverhampton Wanderers.(Birmingham Mail)

The Baggies are hoping to sign 24-year-old QPR winger Mat Phillips, who is a long-time target, in an £8m deal. (Daily Star on Sunday)

Arsenal's Mesut Ozil may have sat out his side's win over Burnley to reach the fifth round of the FA Cup but the result was all that mattered to the Germany midfielder as he posted on Twitter. 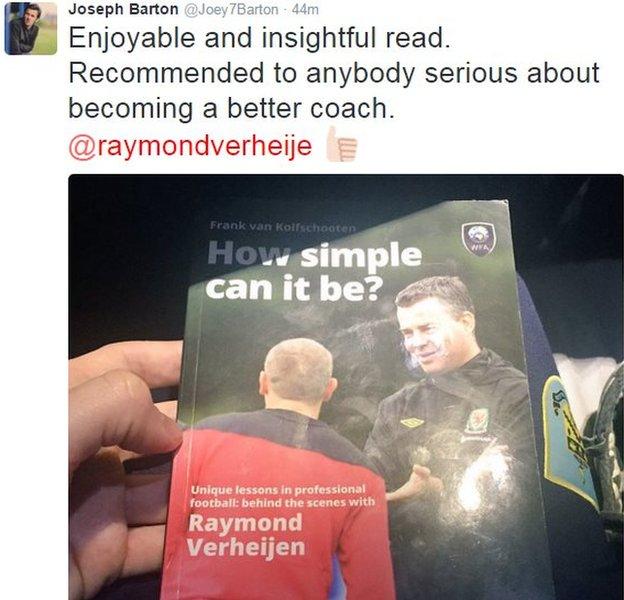 A cheeky Colchester fan tried to get a souvenir from Saturday's loss at the hands of Tottenham after invading the pitch to ask visiting goalkeeper Michel Vorm for an autograph. (Standard)

Arsenal midfielder Alex Iwobi, 19, has revealed he has literally been told to pull his socks up by assistant manager Steve Bould - and wear them higher to match his team-mates. (Talksport)

Former Nottingham Forest, Aston Villa and England midfielder Steve Stone, 44, has put his Victorian stately home in Northumberland up for sale for £1.5m after he and his wife decided to move to Dubai to be with their daughter. (Birmingham Mail)

Crystal Palace star Wilfried Zaha has been described as Britain's vainest footballer after it was revealed the 23-year-old gets his beard and hair cut every day. (Sun on Sunday)