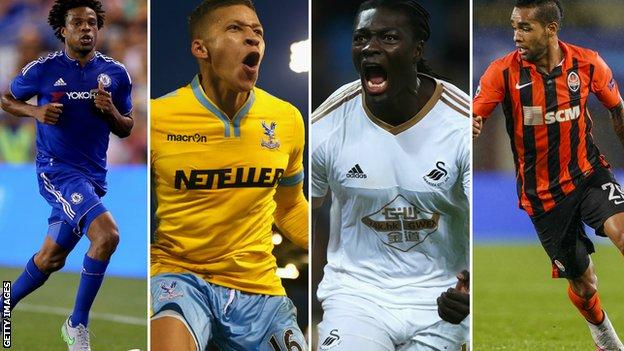 The transfer window is about to close as clubs make their final adjustments to the squads that will take them through until the end of the season.

They have until 23:00 GMT on Monday to sign up or ship out players they will count on between then and May - so who will be the big targets and will the deals go through?

WHY? Newcastle - who have made a £21m bid - are desperate to add firepower in an attempt to push themselves up the table and, for all his fragile relationship with West Brom chairman Jeremy Peace since a move to Spurs fell down in August, Berahino brings goals.

Spurs' need is not so desperate but history suggests he is a player manager Mauricio Pochettino rates as potential support for Harry Kane, who Berahino has partnered for England U21s.

WHERE WILL HE FIT IN? He is a young player with pace and an ability to become a regular goalscorer - important assets for any team. He scored 14 league goals for the Baggies last season and was central to their survival and has 22 goals in 88 Premier League games in all.

At Newcastle he would become a focal point alongside 21-year-old Aleksandar Mitrovic. At Spurs he would lend valuable support to Kane but also provide a danger with his ability to drop deep.

WILL IT HAPPEN? May go down to the wire and no-one should expect the tough negotiator Peace to offer any bargains to potential suitors - August demonstrated he will not be railroaded into doing business. Newcastle could also find Peace unwilling to do a deal that would considerably strengthen a close rival. And of course Spurs love a late deal.

IN THE FRAME? Liverpool, Chelsea

WHY? A late developer, the 26-year-old Brazilian has scored 22 goals in 15 league games and four in 10 Champions League games for Ukrainian side Shakhtar this season, attracting attention from major clubs elsewhere in Europe.

HOW MUCH WILL HE COST? Shakhtar say Teixeira has a £53.2m buyout clause in his contract - higher than an original £38m valuation. Liverpool have so far only offered £24m with £3m in add-ons according to Shakhtar chief executive Sergei Palkin - hence no deal so far.

WHERE WILL HE FIT IN? Teixeira will fit the Klopp template, mobile and busy as part of an attacking spearhead with the likes of fellow Brazilian Roberto Firmino. Would be a big statement of intent and he would have responsibility for solving the goalscoring gap caused by injuries to the likes of Sturridge, Divock Origi and Danny Ings.

Teixeira is desperate for the move to go through and join compatriots Philippe Coutinho, Lucas and Firmino in Liverpool's senior ranks, saying: "I want to be there but that is up to the club president now. I can only hope. I've played with Coutinho since we were 10 and it would be a lot of fun to play with him again."

Whether he gets his wish depends on Liverpool increasing their offer and Shakhtar meeting them somewhere in the middle - but time is against this one.

WHY? Remy is a goalscorer of proven Premier League pedigree who is on the market because of lack of opportunities since his £10.5m move to Chelsea from Queen's Park Rangers in August 2014.

As demonstrated by their interest in Berahino, Newcastle manager Steve McClaren wants to add goal threat to his struggling side while Premier League leaders Leicester want to add quality from a position of strength.

WHERE WILL HE FIT IN? At Leicester he would provide support and strength for the speed and mobility of Jamie Vardy and the creativity of Riyad Mahrez.

Remy would be the spearhead at Newcastle. He is fondly remembered on Tyneside after a successful loan spell from QPR in 2013-14, when he scored 14 goals in 27 appearances. He also has a very respectable overall Premier League record of 28 goals in 71 games.

WILL IT HAPPEN? There's a good chance he will leave Chelsea, who are ready to accept offers after the loan signing of Alexandre Pato. The price is reasonable by current standards and he would fit the bill for any side seeking goals.

IN THE FRAME? Everton

WHY? Everton's problems under Roberto Martinez have been in defence this season but with his attacking resources depleted by the £8.5m sale of Steven Naismith to Norwich City and the failure of Aiden McGeady to make an impact, buying a striker is also under consideration.

WHERE WILL HE FIT IN? A player with pace who has scored 12 times in 21 league games this season, Niasse would provide much-needed back-up for Romelu Lukaku, who has been carrying a heavy burden this season.

WILL IT HAPPEN? Everton have been looking to make a big signing during this transfer window and with Dynamo Kiev's Andriy Yarmolenko out of reach this looks like the one they will be pushing for on deadline day. Expensive for a player with no Premier League experience.

IN THE FRAME? Aston Villa, Sunderland

WHY? The 30-year-old France right-back has fallen down the pecking order and been troubled by injury during his time at Arsenal following a £10m move from Newcastle United in 2014. Debuchy has made only two Premier League appearances this season so it makes perfect sense for him to move on.

HOW MUCH WILL HE COST? Initial loan.

WHERE WILL HE FIT IN? Aston Villa manager Remi Garde is hoping to clinch a deal that will allow his fellow countryman to add experience at the highest level to a side currently looking certainties for relegation. Sunderland boss Sam Allardyce may be tempted into a late move but Garde will know the player and is currently in pole position.

WILL IT HAPPEN? There's a strong expectation Debuchy will go before the deadline, with Villa currently favourites.

WHY? A player of proven quality who has been the talisman for Dynamo Kiev in their qualification for the last 16 of the Champions League, where they meet Manchester City. Now looks ready to finally cut his ties with Ukraine, where he is also a key figure for the national side with 22 goals in 55 games.

WHERE WILL HE FIT IN? A gifted, powerful all-purpose attacker. Wonderful left-foot and can operate on both wings and also as a number 10. Trademark has been to cut in from the right and score - as Everton found to their cost in last season's 5-2 thrashing in the Europe League in Kiev.

Everton boss Martinez has had the player in his sights since then and would use him in the number 10 role. If Arsenal pursue their interest you would imagine his versatility would be ideal there.

WILL IT HAPPEN? Don't see this unless something very dramatic happens - more likely to happen in the summer. Dynamo Kiev simply blocked Everton when they tried to do a deal in August - and it's hard to see why they would sell now with that Champions League meeting with Manchester City coming up.

IN THE FRAME? Swansea City

WHY? The pacy striker is not part of manager Alan Pardew's plans at Crystal Palace this season and has yet to score in the Premier League in the current campaign - but Gayle got 10 in 29 appearances last season and the 26-year-old might just benefit from a change of scenery.

WHERE WILL HE FIT IN? Swansea have been forced to look at strikers because Bafetimbi Gomis' form has faded after a bright start and he would be an energetic partner for Andre Ayew.

WILL IT HAPPEN? There is a deal to be done there and if Swansea come up with a good offer then do not see Palace resisting too hard on this one.

IN THE FRAME? Newcastle United

WHY? Struggled to deliver this season with just five goals in 21 Premier League games and his potential partnership with Andre Ayew has not worked, although the latter has done well. Swansea may be tempted to cash in.

WHERE WILL HE FIT IN? Newcastle United are looking to bring in a striker before the deadline to give them an added dimension - on his day Gomis is a powerful, formidable figure. Just that those days are getting fewer and fewer lately.

WILL IT HAPPEN? Newcastle are working through a list that also includes Saido Berahino, Loic Remy and Seydou Doumbia - manager Steve McClaren is understood to want two strikers so Gomis could be a fall-back option.

IN THE FRAME? Manchester United

WHY? Manchester United manager Louis van Gaal is short of defensive resources with the likes of Marco Rojo out injured and first-choice left-back Luke Shaw a long-term absentee as he recovers from a broken leg. Rose is not currently Spurs manager Mauricio Pochettino's preferred option, with Ben Davies at left-back.

WHERE WILL HE FIT IN? Will fit on the left side of United's defence, where Van Gaal is struggling for experienced personnel.

WILL IT HAPPEN? Long shot but United are desperate for full-backs. Spurs will not be keen on dealing with a direct rival in this instance but could just get a late deadline day phone call. United have reportedly watched Rose four times recently.

IN THE FRAME? Arsenal

WHY? The 19-year-old left-back has barely figured for Leicester but his performances in England's youth teams have marked him out as an almost certain future international.

WHERE WILL HE FIT IN? One for the future. He has also been linked with Liverpool but Arsenal are trying to get in first for a player who could emerge as a threat to Nacho Monreal and England defender Kieran Gibbs.

WILL IT HAPPEN? Leicester want Chilwell to sign a new contract at the King Power Stadium and stay at a club on the up. Would take a special offer from Arsenal, or indeed anyone else, to persuade the Foxes otherwise.