John Terry's Chelsea career will end at the conclusion of this season - his revelations after the 5-1 FA Cup fourth-round win at MK Dons signalling the end of an era at Stamford Bridge.

Only four players have played more than his 477 Premier League appearances for a single club - Liverpool pair Steven Gerrard (504) and Jamie Carragher (508), and Manchester United pair Ryan Giggs and Paul Scholes, with 632 and 499 respectively.

So with Terry's departure the landscape of the Premier League and Chelsea will undergo a significant shift next season.

Is Chelsea's decision a surprise?

It clearly was to John Terry as he admitted it was "not going to be a fairytale ending". Instead, at a time not of his choosing and with the ruthless decision-making that has become a trademark for Chelsea's hierarchy, he is on the way out in May.

Terry has made it clear he wanted to stay on but this move has come from the top of club, most likely in the shape of owner Roman Abramovich and director Marina Granovskaia, the Russian's closest adviser and negotiator-in-chief.

Chelsea may simply be working on the basis of brutal realism. Terry was 35 in December and has heavy mileage on a clock that has been running since 28 October 1998, when he made his debut as a late substitute in League Cup tie against Aston Villa.

There will be a new manager at the Blues in the summer and the removal of the last of the longstanding old guard in west London leaves the decks clear without the presence of a player and personality who has been a huge influence on and off the field.

Where there may be surprise is that Terry's form, like Chelsea's, has been revived since the sacking of Jose Mourinho in December. In the 1-0 win at Arsenal in January, Terry was the defensive rock of old, despite having been informed before that game that his career at Stamford Bridge would be over in months.

In the final reckoning, Chelsea clearly believe that given his advanced years he is only going to decline from here on - a verdict he might dispute in typically combative fashion - and that a lucrative contract can be best spent on someone else.

What does Terry bring to Chelsea?

The banner hanging from Stamford Bridge's Matthew Harding Stand says it all about his relationship with Chelsea's fans: "JT. Captain, Leader, Legend."

Terry, quite simply, has been the towering figure in the most successful period in the club's history. He has always been a divisive character outside Stamford Bridge but inside he is loved by fans who regard him as a shining symbol of the club's glory years.

When Abramovich arrived in July 2003 and the trophies flowed following Mourinho's appointment in 2004, Terry fearlessly led from the front as the manager's voice on the pitch. He is one of the most significant figures ever to have represented Chelsea. 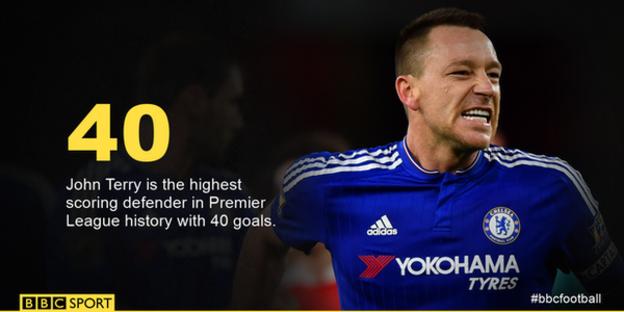 And yet there is a thread running through his Chelsea career that means there will also always be a darker reflection on his time at Stamford Bridge.

The image of Terry's tears after the Champions League final loss on penalties to Manchester United in Moscow in 2008 will be an enduring one, brought on by his slip as he went to take what would have been the winning spot-kick, hitting the post instead.

The Champions League was a narrative running through his career, with two semi-final defeats by Liverpool in 2005 and 2007 and another agonising injury-time last-four exit to Barcelona in 2009 - then the most ironic twist of all in 2012.

Chelsea, under caretaker manager Roberto di Matteo, finally claimed the holy grail with victory on penalties against Bayern Munich in the Germans' own Allianz Arena. All with Terry on the sidelines.

He had been sent off in the semi-final second leg in Barcelona and for all his posing in the team pictures, swiftly changing out of his suit into his kit as Didier Drogba's final penalty went in, he actually had his nose pressed up against the window as an outsider on Chelsea's greatest night.

And when the Europa League was won against Benfica in Amsterdam a year later Terry, whose relationship with another interim manager Rafael Benitez was fragile, was out through injury.

In September 2012 he was banned for four games and fined £220,000 after a Football Association regulatory commission found him guilty of racially abusing then Queen's Park Rangers defender Anton Ferdinand during a game at Loftus Road on 23 October 2011.

These will be gaps on his CV and moments of controversy - but when Chelsea's story is written he will be remembered as the most successful captain they have ever had.

What will he be remembered for?

The signs have been there that Terry, magnificent as the title was won last season, was starting to suffer a decline in his powers.

And yet he will still be missed as someone who often dragged Chelsea to success by force of his own personality, a character supporters could identify with as one of their own, his programme notes often ending with the rallying call "Come On The Chels!"

Even as recently as 16 January, it was the marauding Terry who grabbed a 98th-minute equaliser to earn a 3-3 draw against Everton at Stamford Bridge.

He has not just been the driving force at the back, his record of 40 goals makes him the highest-scoring defender in Premier League history.

Even if he is approaching the end of his career at the top, his giant personality, winning mentality and determination to put himself on the line in every game means he will leave a huge hole in Chelsea's team.

As with former Liverpool captain Gerrard, a contemporary of Terry's with England and who twice almost became a Blues team-mate, it will be hard to picture his side without him leading it out.

End of an era?

Terry's departure really will be the end of a glittering era for Chelsea. He is the last of the big beasts to leave one of the most powerful dressing rooms of modern Premier League times - one which has occasionally been accused of wielding player power when managers such as Andre Villas-Boas and even Mourinho have been sacked.

Terry leaving breaks the last, and strongest, link in that chain of power.

Terry has already made it clear, unlike his great friend and team-mate Lampard, that he is aligned with Gerrard in not wishing to play for another English club once he has gone.

He does, however, plan to carry on and he may be tempted to follow the same lucrative path as Gerrard and Lampard. Terry will not be short of offers and he could join either of those at LA Galaxy, where former club and country team-mate Cole has also arrived, or New York City FC.

His former England team-mate David Beckham is in the process of building his Miami Beckham United franchise to join the MLS. New clubs are always keen to make a statement signing - could Terry join Beckham?

And what about China? The Chinese Super League is big, rich business as proved by the £25m deal that took Ramires from Chelsea to Jiangsu Suning during this transfer window.

Terry wants to play on away from England. He is unlikely to be short of offers.