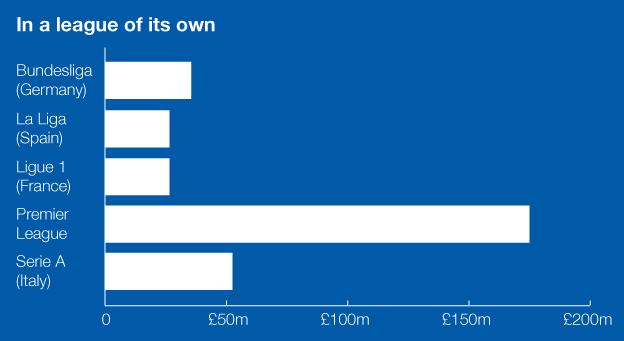 Dan Jones of finance experts Deloitte said: "Notably, this January's spending has been driven in large part by clubs in the bottom half of the table.

"The promise of the new broadcast deal for Premier League clubs from next season onwards and the threat of missing out through relegation is contributing to clubs investing in an attempt to stay in the league."

The big football story of the day was about a managerial appointment rather than a signing.

Manchester City announced that Bayern Munich boss Pep Guardiola will replace Manuel Pellegrini at the end of the season.

The biggest deals on deadline day

Deadline day has become an event in its own right in British football, but this season's would have been a disappointment to most observers.

Watford signed two players for undisclosed fees on deadline day, loaning both to Granada. The signings of Rennes midfielder Abdoulaye Doucoure and Udinese striker Adalberto Penaranda are reported to be worth £16m, which would make them January's top spenders at £34m.

The next biggest English transfer on deadline day came outside the top flight, with Championship side Middlesbrough spending £9m on striker Jordan Rhodes from divisional rivals Blackburn.

No clubs inside the top eight Premier League places signed anyone on transfer deadline day.

In fact, despite January spending reaching a five-year high, it was a very quiet month for the top flight's leading sides.

While surprise leaders Leicester signed Copenhagen defender Daniel Amartey for about £6m and Birmingham winger Demarai Gray for £3.7m, Arsenal were the only other title contender to bring in a new face - spending £5m on Basel midfielder Mohamed Elneny.

Manchester City signed Anthony Caceres but loaned him out to Melbourne City, while Tottenham and Manchester United did not bring in anyone.

The combined spend by the clubs currently in the bottom six was £90m this January, half of the total. Last year, the clubs in those positions spent £20m, less than 20% of the total.

The two biggest deals before deadline day were both by struggling Newcastle - £12m for each of Swansea midfielder Jonjo Shelvey and Tottenham winger Andros Townsend, both England internationals.

While lots of strugglers strengthened their squad, bottom side Aston Villa let five players go in January without signing anyone.

Villa boss Remi Garde is reportedly considering his position after saying last month they needed new signings to have any hope of staying up.

The deals that did not go through

West Brom's Saido Berahino was in demand for the second transfer window in a row - but again failed to secure a move away.

Tottenham had a £22.5m bid rejected for the striker in the summer, with Berahino, 22, seemingly threatening to strike as a result and not playing regularly since. Newcastle offered £21m for him on Sunday, but the Baggies again refused to sell.

Liverpool were frustrated in their attempts to sign Shakhtar Donetsk forward Alex Teixeira, 26. The Reds offered £24.5m for the Brazilian but would not meet the Ukrainian club's £39m valuation.

Title chasers Leicester offered £18.7m for CSKA Moscow forward Ahmed Musa, 23, but decided not to meet the £22.8m in his buyout clause. They also failed to sign Chelsea striker Loic Remy on loan.

That was reportedly because the Blues thought Colombia international Radamel Falcao might leave Stamford Bridge halfway through his loan spell from Monaco, but a move to Atletico Madrid never materialised.