Pep Guardiola has agreed a three-year contract to become Manchester City manager in the summer.

The 45-year-old, currently in charge at Bayern Munich, will replace Manuel Pellegrini, who will leave on 30 June.

A statement from City said Chilean Pellegrini, 62, was "fully supportive" of the announcement being made.

The club said negotiations with former Barcelona coach Guardiola had been "a recommencement of discussions that were curtailed in 2012".

Roberto Mancini was City boss at the time, and led them to the domestic title that year.

Pellegrini succeeded the Italian in 2013 and took the club to a Premier League and League Cup double the following season.

He has won 64 of his 99 Premier League games as a manager, a record only eclipsed by Jose Mourinho, who won 73 of his opening 99 league matches as Chelsea boss.

City could yet win four trophies under Pellegrini this season.

They are already through to the final of the League Cup and are second in the league behind Leicester City.

The Blues are also through to the knockout stages of the Champions League and will play Chelsea in the fifth round of the FA Cup.

"I talked to the club and I will finish my contract on the original date," said Pellegrini on Monday.

"We signed a contract for one more year, but with a clause that one of the club or me cannot use that extended contract. So I will finish here on the original date.

"They are not doing anything behind me. I knew this a month ago. But I don't think it's good, this rumour and speculation about different things. I would prefer to finish the speculation today. That's why I told the press, I told the players, and I spoke with the club two weeks ago saying that I would do it." 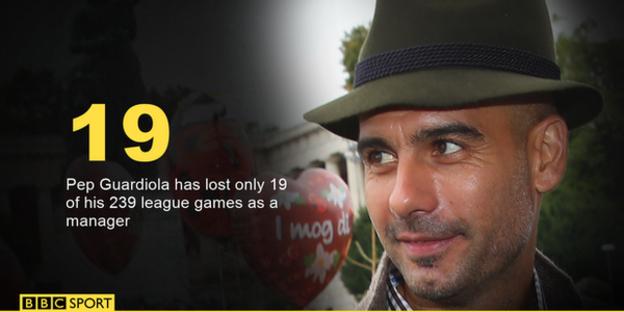 Why City went for Pep

Former Man City winger Trevor Sinclair said news of Guardiola's appointment was "a massive, massive statement" by the club and "huge news for all City fans".

He told BBC Radio 5 live: "He's the hottest manager out there. Every club would want him.

"And when you look at the recruitment possibilities now, that's where you really start to get excited. He'll be able to bring in some huge players."

Liverpool manager Jurgen Klopp spoke to the media before his side's game with Leicester on Tuesday, and said of Guardiola's appointment: "He is one of the best managers in the world, no doubt about this.

"He had two big, big clubs where he has worked at and now he will do his job at Manchester City.

Former QPR boss Harry Redknapp told BBC Radio 5 live: "City are fighting on all fronts still, and you wonder what signal it sends out to the players when they know the manager isn't going to be there at the end of the year.

"Pellegrini is an excellent manager and a really nice guy. I'm sure he'll want to go out as a success. It's a massive move for Man City. Guardiola is really a big statement."

Stoke manager Mark Hughes said: "I don't think the news itself was a surprise, maybe the timing of it?

"I think Pellegrini's done a great job. Coming in after Mancini the club seemed a bit fragmented. He's won trophies, which is what they demanded. It's unfortunate that when a manager with the quality of Pep Guardiola comes on the market, a team like Man City feel the need to go after him."

The announcement that Guardiola is to be the next Manchester City coach is not a huge surprise - but the timing is.

Manuel Pellegrini is still in charge and is still in serious contention for four trophies.

What is beyond question, however, is that this is the most powerful statement of intent from City's Abu Dhabi owners that they intend to construct a club to stand alongside any in world football.

Guardiola is the game's most coveted coach with a history of claiming the top prizes.

The combination of the charismatic Catalan's coaching brilliance and the financial backing he will receive makes this a partnership the rest of football world could come to fear.