Pep Guardiola will "change the mindset of English football" as Manchester City manager, his father has told BBC Sport.

The 45-year-old will replace Manuel Pellegrini in June after agreeing a three-year deal at the Etihad.

"He will look to carry on the football of his Barcelona and Bayern teams," Valenti Guardiola said of his son.

Spaniard Guardiola won 14 trophies in four years at Barcelona, including two Champions Leagues, before taking a year out of management and then joining Bayern Munich in 2013.

He announced in December he would be leaving the Bundesliga side after three seasons in charge, during which he has already won two league titles, but has failed to lift the Champions League - twice getting knocked out at the semi-final stage.

"He has this attitude to football [as an art form]," said Valenti. "Not just to win, but to win in a distinctive way that entertains the public."

"The style of football I see in England, I doubt he has that in mind I mean, the football is very different. For that reason, I think he will have to change the mindset of English football.

"I think he will be happy - he wouldn't be leaving if not. Right now in Germany, he is held in very high esteem."

In search of the real Guardiola

BBC Sport's David Ornstein and Patrick Nathanson travelled to Santpedor, an hour's drive from Barcelona, to speak to Valenti Guardiola at his family home.

The sleepy village, with its intimate squares and winding alleys, would be just like the plethora of other 'pueblos' that dot the Catalan countryside, were it not for the worldwide recognition bestowed upon its most famous son.

Guardiola's parents, Valenti and Dolors, still live in Santpedor and their pride in their son's achievements is evident in the photographs and mementos that decorate the neat family home, just around the corner from the 'Camp d'Esports Municipal Josep Guardiola', where the local team play.

Valenti, a sprightly and affable octogenarian, warmly welcomed us into the house last week, as we went in search of the real Pep Guardiola.

The young Guardiola - 'Football consumed him'

Josep 'Pep' Guardiola Sala joined Barcelona's famed La Masia academy at the age of 13 in 1984 and spent six years in the youth team before making his professional debut in 1990.

"Already from an early age he would always be heading out kicking a football about. There was a sure-fire way to make him happy at Christmas and that was to give him a football as a present.

"As a youngster he would constantly be there playing in the square next to the house where we used to live, always with a ball at his feet. Everywhere he went, he went with a football.

"Given how much we knew Pep loved football, and that Barcelona had always been his team since he was little, we were certainly very happy at the beginning.

"But when he used to call up, it was clear that he was missing his family and his mother used to cry, but only when she had hung up the phone. It was very painful to be apart, but at the same time we knew this had always been his dream in life.

"When I used to go and watch him for the under-14s and we'd head back home in the car together to wash his clothes over the weekend, after a defeat on that journey he would sit in absolute silence. From an early age football was something that consumed him."

The player - 'A good person whose personality changes'

Guardiola became a fixture in the Barcelona midfield and had won four La Liga titles, one European Cup and one Copa del Rey, the Spanish domestic cup, by the time he was named captain by manager Louis van Gaal in 1997. By the time he left Barca in 2001, Guardiola had played 11 seasons for the side and won two further league titles and another Spanish Cup. He went on to play in Italy for Brescia and Roma and for Al-Ahli in Qatar before finishing his playing career at Sinaloa in Mexico.

"He has always been a leader. Even when he was playing with his contemporaries as a kid, he was the one orchestrating things, taking the lead. We didn't know where this instinct came from, with him being so young.

"I remember one time a team from a nearby town came to play against Santpedor. One player was missing to make a full 11-a-side game so they said 'Josep, why don't you come and make up the numbers?'

"He played and scored I don't know how many goals. So much so that the other team said as long as Josep is playing, there is no point in them turning up.

"He is a very good person - I don't say this because I am his father; many people would testify to this. The thing that happens is that in a footballing context his personality changes. He changes from the Pep that we know and love.

"He wants to win - to win and to play well. The game transforms him. I really don't understand where his fierce desire comes from. It certainly doesn't come from me, as I never played football. When I watched him on TV he reminded me of Michel Platini, the way he played.

The manager - 'He wants the fans to enjoy it'

Guardiola returned to Barcelona in 2007, taking charge of the B team for one season and winning the Second Division title. He was appointed manager of the senior team in 2008, leading the club to three league titles, two European Cups and two Spanish Cups in his four seasons as boss. He took a year out before becoming boss of Bayern in 2013, leading the German side to two Bundesliga titles and one German Cup to date.

"It was something that we never thought would have happened. He came through the Barcelona youth teams and then the coaching system, so there were those who were familiar with how he worked, and so they said let's give him a go.

"I don't think they regretted it because he became Barca's most successful manager. We were very happy for him, because we knew how much satisfaction it gave him, to have been able to have put Barca where he put them.

"He went to New York [before starting the Bayern job] to disconnect a bit from the stress that came with being manager of Barcelona, and it was also for his children, so that they could learn English well.

"It hasn't gone to his head, he has stayed the same. It is on the pitch that he is transformed. There he doesn't have friends, he doesn't have anyone - he just wants to win. He wants the fans to enjoy his style of football.

"As soon as the referee blows his final whistle, Josep is an unassuming and very likeable guy. In a word, he is humble."

The critics - 'He has had nothing on a plate'

In November 2001, while a player at Brescia, Guardiola was banned from playing for four months and received a £30,000 fine for failing two drugs tests.He continued to protest his innocence and was finally cleared of all charges in 2009.

"There have been times when he has been attacked from all sides. There have been journalists who have not liked him and when there was the whole doping saga in Italy he had to show great strength not to decide to quit the game but rather to continue because he was clean and he wanted to prove that. And that is what happened - he was cleared. 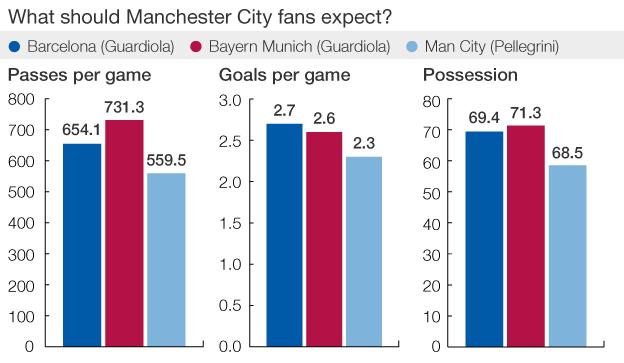 "There were times when he had a headache and his mother would say 'take an aspirin' and he would refuse, in case it affected his blood tests - and they say he was guilty of doping. That was very tough for him, but his response was to fight and fight - and that is the same approach he has with football. It is part of his nature, never to lower his guard.

"It is not like he has been given anything on a plate - when he first started at Barcelona he had to prove himself as there were those who had their doubts and told him to go back home. So he achieved it all through his own hard work."

Guardiola at City - 'He will take no-one for a ride'

"They can expect to see someone with great humanity. They will be very happy because he has never disrespected anyone, he is very well-mannered and polite. To use a Catalan expression, 'he wont be taking anyone for a ride'.

"Winning, winning. That is what drove him. Winning but also playing football in a certain way, because at the clubs he was at his style changed the way the team played. Passing, passing, passing then at the right moment, bam, in the goal! None of the long-ball stuff. He never liked that.