Sunderland striker Steven Fletcher has joined French side Marseille on loan until the end of the season.

The 28-year-old Scotland international has only scored four goals in 18 club appearances this season, with his last strike coming on 1 November.

He scored 23 goals for Sunderland following his August 2012 move from Wolves for a fee of up to £14m.

Fletcher's loan spell at the mid-table Ligue 1 side takes him up to the end of his contract with the Black Cats.

He is Marseille's second British loan signing of recent years, with Joey Barton spending 2012-13 on loan at the Velodrome from QPR.

Les Olympiens, who are 10th in the table, are at home to unbeaten leaders Paris St-Germain on Sunday, following Tuesday's trip to Montpellier.

How Marseille reported the signing 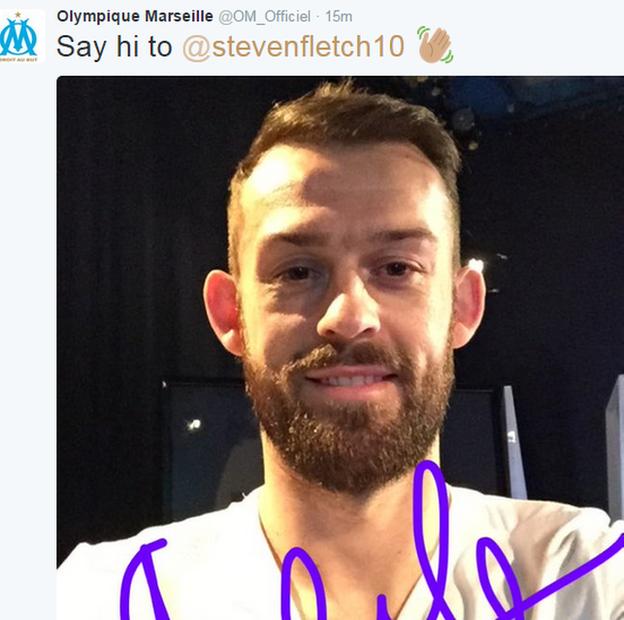 The French club's website seemed to get quite animated when introducing Fletcher.

"He will not leave you unmoved," it began. "He will not go unnoticed. Marseille has added a Scotsman to the mix. And if you know anything about the mentality of that people, you'll know that's good news."

However, the club's media department also said Fletcher "is not known to be a technical player", has a "frank look" and a "simplicity in exchange".

Where will Fletcher fit in?

Burnley midfielder Joey Barton spent a season with Marseille in 2012-13, as they finished second in the table.

"There's huge expectation on Steven Fletcher," Barton told BBC Radio 5 live. "The club are six points off the Champions League places, so the season is really at a crossroads. It's going to be a baptism of fire.

"It's going to be difficult for him to get in the starting XI. Marseille play 4-2-3-1 and Michy Batshuayi is the main centre forward."