Manchester City's Ivory Coast midfielder Yaya Toure, 32, will be offered a £30m-a-year contract to move to China in the summer. (Telegraph)

Schalke's £40m-rated attacking midfielder Leroy Sane, 20, is likely to be a target for Pep Guardiola when he takes charge at Manchester City at the end of the season. (Star)

Guardiola is also keen to make a £30m summer move for Barcelona goalkeeper Claudio Bravo, 32. (AS - in Spanish)

Guardiola, 45, still has work to do at Bayern Munich - and he has denied rumours of dressing-room unrest at the German champions. (Sun)

Manuel Pellegrini, meanwhile, could replace Gary Neville as Valencia manager when he leaves Manchester City at the end of the season.(Talksport)

But the 62-year-old Chilean has already been offered the Chelsea manager's job.(El Mercurio via Metro)

Pellegrini is also a contender to take over at Paris St-Germain this summer. (Mirror)

Defender John Stones is keen to stay in the north west should he leave Everton in the summer. The 21-year-old is a target for Manchester City, Manchester United, Chelsea, Barcelona and Real Madrid. (Times)

Liverpool had a £22.7m offer for Inter Milan and Argentina striker Mauro Icardi, 22, turned down on deadline day as the Italian side did not have enough time to find a replacement.(Corriere della Sera via Football Italia)

Arsenal manager Arsene Wenger and Southampton boss Ronald Koeman were involved in a tunnel bust-up after the Gunners were held to goalless draw by the Saints.(Express)

Championship side Leeds are lining up an emergency loan deal for out-of-favour Norwich striker Kyle Lafferty, 28, who is expected to play for Northern Ireland at Euro 2016. (Talksport)

West Ham co-chairman David Sullivan says he would have tried to sign Southampton striker Charlie Austin, 26, had he known he was available for just £4m.(Mirror)

Liverpool and Serbia winger Lazar Markovic says former Reds manager Brendan Rodgers "changed" during his final season in charge at Anfield. The 21-year-old is on loan at Turkish side Fenerbahce.(Fanatik, via Liverpool Echo)

Leicester are hoping to sign 28-year-old Bordeaux and France midfielder Clement Chantome on a free transfer when his contract expires in the summer.(L'Equipe via Express) 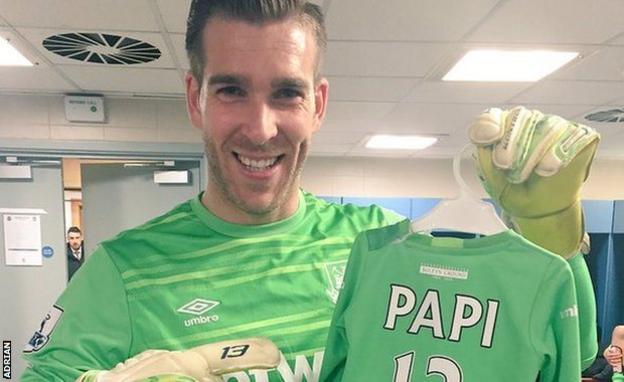 Barcelona superstar Lionel Messi, 28, has arranged to meet a young Afghan fan who became famous when pictures emerged of him wearing a striped plastic bag with the Argentina attacker's name and number written on the back. (ESPN)

Liverpool's new ticket-price structure has been described as "morally unjustifiable" by the club's supporters' committee after it was announced that some seats in the rebuilt Main Stand will cost £77 next season. (Guardian)