"A lot of people stop me on the street and say 'I am a fan of another team but if Leicester win the title I am very happy'", says Leicester manager Claudio Ranieri.

Of course, there are a few exceptions, but most of us football fans are rooting for Leicester, aren't we?

If they do cling to top spot over the remaining 14 games of the season it will be the most romantic tale since, well, Norwich almost did it a generation ago in 1992-93.

There's plenty of love for the East Midlands outfit right now. It might be because, as a nation, we love a plucky underdog. It might be because we love their top striker's rags-to-riches story, rising from non-league to international football stardom in just a few seasons.

In fact, there are plenty of reasons to keep on hoping that Leicester can triumph over the league's big clubs. Here are some of them:

They could start a trend

If Leicester do win the title, "it gives everyone hope" says BBC Sport pundit and tactical expert Pat Nevin.

Since the Premier League began, only Blackburn Rovers have managed to take the title away from either Manchester United, Arsenal, Chelsea or Manchester City.

Where Rovers were funded by Jack Walker's relative wealth, Leicester have built a team spirit with pizza for clean sheets and champagne on reaching 40 points.

Former Chelsea winger Nevin said he would not "fall over in surprise" if Leicester do go on to win the league - and that their success would "be the start of the change - that any number of teams can win it".

"For a long time, it has been three of four teams that could win it, and no one else," Nevin said. "But if Leicester win, it gives everyone hope."

The second coming of Claudio Ranieri

Come on, admit it, you all doubted the appointment of 'The Tinkerman' in the summer.

How could the amenable Italian improve a team which had just won seven of its last nine games to achieve one of the great escapes of Premier League history?

"I think Ranieri often gets overlooked, because it is extraordinary what he has done," said Nevin. "Some of it must be down to the technical knowledge of the manager.

"He has got a group of players to work in a structure. A large part of that was to understand the capabilities of the group and find a methodology. He came in and looked at what fits best. He put round pegs in round holes."

Now if they can just cling on to first place...

They win without even having the ball

Take note Louis van Gaal: Leicester's achievements this season are based on an anti-possession 'philosophy'.

They have scored the most goals (5) from the most shots (13) after counter-attacks - and have the league's second-highest shot conversion rate at 18%.

And in 13 of their 14 Premier League victories this season, they have had less possession than the opposition - as little as 30% in their 2-1 win over West Ham in August and only 36% in Tuesday's win over Liverpool at the King Power Stadium.

"The pace, the way they play, they are brilliant on the counterattack and know when to press plus their energy levels are fantastic," added Nevin.

"If your best weapons are incredibly quick players, then there is no point in having all the possession and playing deep as it will make it harder for them to run into space." 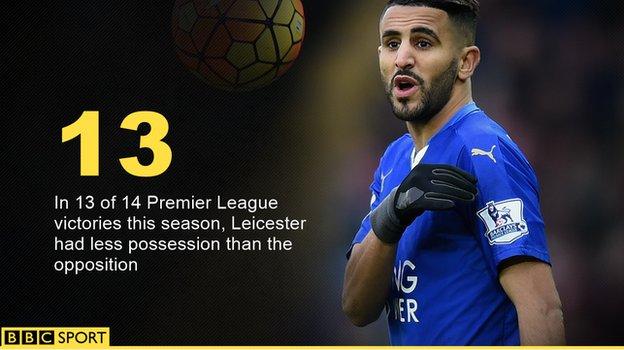 "That is out-rageous!" exclaimed BBC Radio Leicester's Ian Stringer as Jamie Vardy fizzed a 30-yarder over Simon Mignolet and into the top corner during Tuesday's 2-0 win over Liverpool. "That is a goal you would expect a team who are going to win the league to score."

There was more. "Watch it again, watch it again and watch it again," demanded Stringer - Vardy's goal momentarily making the BBC man either forget he was on the radio, or provoking a passionate plug for that evening's Match of the Day.

Five reasons they could actually do it

1. A winning mentality. This is a team that have lost just just twice in the Premier League this season. They're beating some very good teams with relative ease. They look like a top-four team, and maybe more.

2. Style of play. They're playing some very attractive football with skill and guile. It's a pleasure to watch - and some of the best football from a Leicester City side that I've ever seen.

3. Claudio Ranieri. This man didn't change a great deal when he took over from Nigel Pearson, but now you're seeing his team and his stamp on Leicester City in a big way. He's a man who a lot of pundits thought would be the first manager to be sacked this season. He's proved a lot of people wrong.

4. The fans. They have been outstanding at the King Power Stadium. Their noise brings an almighty energy to the team. It's cliched to say they're the 12th man but it's true. If you're walking out of the tunnel to that wall of noise, it's going to give you a massive lift in any game.

BBC Sportsday asked for responses to #WhenIDidALeicester and readers were very quick - and very funny - with their examples of exceeding expectations.

Here are some of the best: