It was crucial that Arsenal beat Bournemouth on Sunday because they have a massive month ahead of them, and they needed to restore some belief and find some momentum.

The Gunners are going strong in three competitions - the Premier League, FA Cup and Champions League - and have a big opportunity to land at least one trophy.

Nobody is giving them a chance against Barcelona in Europe but that does not mean they cannot beat them. It is a daunting prospect but, if I were still a competitor, I would fancy my chances of winning that tie. Why not?

There are some tough fixtures coming up in the league too - Leicester at home next Sunday and trips to Manchester United and Tottenham - but they are games to look forward to, not fear.

If the Gunners are going to win the title again this year, then they have got to pull a big result out of the bag sooner or later.

The next few weeks give them that chance to get a season-defining win of their own.

The game itself turned out to be quite straightforward for Arsenal on Sunday - the difficult thing was waiting to be last to play at the weekend.

Arsenal had to sit in their hotel and watch Tottenham win and move away from them, after Leicester had made a big statement by beating Manchester City.

The Gunners were under pressure anyway after only taking two points from their last four league games but also had an extra day of build-up and an extra day to think about their situation.

So it was important that when it came to their turn, they showed they could handle it.

I called it a must-win game for Arsene Wenger's side before kick-off and they got the job done. Those two quick first-half goals meant they pretty much made sure of victory early on and stayed in touch with the front-runners.

'Leicester another game Arsenal have to win' 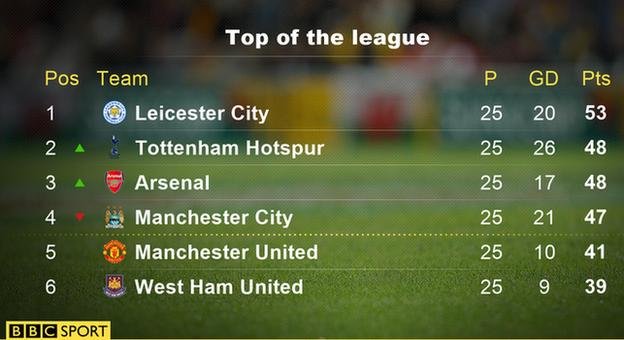 Beating Bournemouth got Arsenal's title bid back on track and sets them up nicely to take on three of the top five in the next four weeks, starting with the visit of leaders Leicester on 14 February.

Arsenal inflicted the Foxes' first defeat of the season when they won 5-2 at the King Power Stadium at the end of September, but Claudio Ranieri's side have come a long way since then.

Not only have they become more and more confident as the season has gone on, they have tightened up a lot at the back.

I was on Match of the Day 2 Extra with Foxes defender Danny Simpson on Sunday and it was interesting to hear him talk about the defensive work that Ranieri has done on the training ground.

So, I don't know if next Sunday will be as free-flowing as that 5-2 game, which was an absolutely cracking match because Leicester were so open and Arsenal were not going to back down.

Leicester showed against Manchester City that they have now got the balance right between defence and attack and they protect themselves so much better.

But if Arsenal score first, then I think it might be another end-to-end game because Leicester will not sit back.

In that scenario, the Gunners will have to demonstrate that they can defend better than they have done so far this season because, again, I think it is a game that they have to win.

'It has been a clean race for the title so far'

I know from experience what it is like when you are clear like Leicester, and also when you are playing catch-up the way the likes of Arsenal, Tottenham and Manchester City are now.

If you are the hunted then it is a very different feeling to being the hunter, which is where the mind games usually come into play.

But it has been a very clean race for the Premier League title so far - unlike previous years, we have not heard managers saying anything to try to upset their rivals at the top.

Most weeks they don't play against their direct rivals either, so they can only try to put them under pressure by winning their own game and seeing how everyone else gets on.

When you actually get to play your nearest opponents, you have to make it count.

Leicester have already done that this weekend. The thing that will have hurt the most for Manchester City is knowing that they were second best, and that defeat might have almost finished them off.

Now it is Arsenal's turn. They know they cannot afford to lose head-to-heads against any of their rivals, but this is their chance to deal a massive blow to everyone else's title aspirations.