Moore's last game in charge was a 2-1 loss to Stevenage at Victoria Park on Tuesday, a result that leaves the club four points above the bottom two.

"This is an extremely difficult decision but one we feel is right," said chairman Gary Coxall.

The 63-year-old was appointed manager in December 2014, and saved the club from relegation last season.

Pools back in trouble

Despite a remarkable 'Great Escape', which saw Pools overhaul a 10-point deficit to preserve their Football League status, Moore has been unable to steer the club away from trouble this term.

Four wins in all competitions from the first four games lifted the club up to third, but form has dipped dramatically.

Tuesday's result was their fourth successive game without a win, and their 16th league defeat of the season.

However, a number of postponements mean Hartlepool have played fewer games than any of the bottom six clubs, including five fewer than Stevenage.

"Ronnie has worked tirelessly to bring success to the club and we thank him sincerely for those efforts and wish him well for the future," added Coxall. 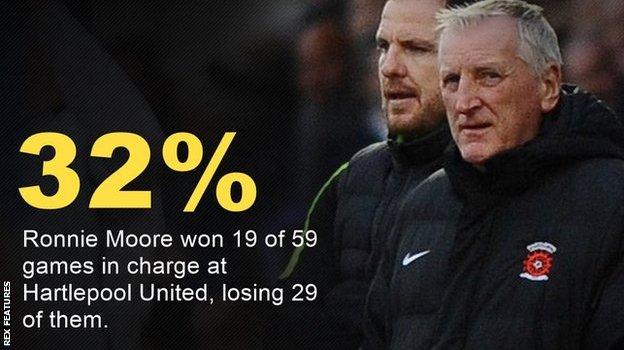 Moore, who was Hartlepool's ninth manager of the decade, lost 29 of his 59 games in charge, but admitted the Stevenage loss was critical to his future.

"It's a devastating result for me," Moore told BBC Tees. "This is a game I looked at where I thought we could win this.

"The fans are frustrated, we all want to win. We had enough of this last season and we wanted to kick on, but at this present time we're not having that."