Leicester have lost only two out of 25 Premier League games this season, and what has been really refreshing about their success is they have simply stuck to what they are good at.

The reason so few sides have been able to deal with their tactics is not because they do not know how to cope with counter-attacks and an old-fashioned 4-4-2 formation, more that not many of them have even tried.

By that, I mean when teams have played the Foxes, they have believed they could beat them playing their way - and paid the price.

Foxes' formation is a perfect fit

Some people think the 4-4-2 formation Leicester use is a bit prehistoric but they are showing it is a great system when your players know how to play it perfectly.

That is mostly down to coaching and the work they have done as a team in training, but it also relies on the intelligence of individuals to know they are all defending when they have not got the ball - which is a lot of the time.

Unlike the rest of the top teams, they are not bothered about possession - Leicester's passing statistics are among the worst in the top flight.

Instead, they defend well, do not over-play at the back and get the ball upfield quickly, using the pace and efficiency of their forward players to punish teams.

They give the ball away a lot because they play a lot of quick, long passes forward into final third of the pitch.

It is not always pretty, and is totally different to the way the rest of the leading teams play.

Those sides expect to dominate possession because, in most matches, they have the better players and they trust in their attacking quality and strength.

No-one can match their intensity

Nobody has been in awe of Leicester or given them respect and tried to shut up shop - and nobody, apart from Arsenal in September, seems to have been able to match their intensity and their attacking play.

That is going to change, although it will not happen this weekend.

Arsenal whacked Leicester 5-2 at the King Power Stadium, so I would be gobsmacked if the Gunners alter their possession-based attacking approach when they play them again at Emirates Stadium on Sunday (12:00 GMT).

But when teams like Norwich and West Brom visit the King Power in the next few weeks, I think we will find out how Leicester get on against totally defensive-minded opponents in games they will need to win if they are going to be champions.

To stop the Foxes, those teams will just drop off like Claudio Ranieri's side do, crowd the midfield to condense the play, and sit so deep Leicester cannot play long balls over the top.

They will deny them space to break into and make them pass their way through a packed defence, rather than let them run at a stretched defence - which is how many of their goals have come so far.

Leicester are not the only Premier League team who play counter-attacking football - in October I looked at how West Ham and Crystal Palace have had some success playing that way too.

It is the Foxes who have been by far the most impressive, though, because they have been able to keep playing at a high tempo from the start to the finish of matches.

Again, that shows whatever they are doing in training is right, because I know from experience you do not just stay that fit over many months of the season.

Some people have said they have been fortunate not having many injuries. But is it luck, or is it down to a really good medical staff and a training regime that keeps the players fit and at the level of fitness required to play the way they do? I don't think it is a coincidence they have managed both.

Sure, you need some luck along the way too but I certainly think their fitness levels are far above most of the other top-flight teams.

That has made their style of play more effective, which has made them harder to beat. You cannot wear them down or just wait for them to tire.

No tinkering means team has gelled

I was brought up playing 4-4-2 and for it to work well, you need to develop little partnerships all over the pitch.

For example, the relationship between the right-back and right-midfielder has to be spot on. The best example I can think of that in the past 25 years is at Manchester United, when they had Gary Neville and David Beckham.

Those link-ups are working for Leicester too. Riyad Mahrez does have some defensive responsibilities down the right, but he can also go wandering over to the left in the way he did to score against Manchester City because he knows that, behind him, Danny Simpson is going to keep his position - he is not expected to go past the halfway line much. 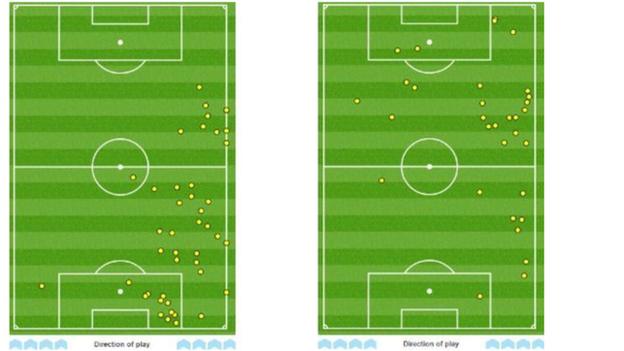 What has helped Leicester develop those sort of partnerships so effectively is having such consistent team selections.

Claudio Ranieri has picked the same team for the past five league matches and has made only 21 changes in 25 games, the fewest in the Premier League.

It means the team has gelled in lots of areas, and is another reason they have got better as the season has gone on.

Scoring first does not help either

When counter-attacking teams concede the first goal, they obviously have to respond by altering their tactics and are often less successful.

But you cannot say it is crucial to score first against Leicester because of how they reacted when that happened earlier in the season. We know they will still come at you.

Until the end of October, Leicester leaked a lot of goals and had to come from behind a lot - they did it six times in their first 11 games to gain 10 points, which gave them a reputation for having a never-say-die attitude.

Their defensive improvement means that has not happened much recently - they have conceded only eight goals in their past 14 league games, and have been behind only once in that time - when they lost to Liverpool on Boxing Day.

It is still important to score first in any game - statistically you have a much better chance of winning.

But the problem is if you go after Leicester early to try to get the first goal, that is when you are at your most vulnerable.

It is a Catch-22 situation, and Arsenal are the next team who must decide how to handle it.

I do not see the Gunners changing their attacking approach on Sunday because Arsene Wenger is the type of manager who does not worry too much about the opposition.

I totally understand why, and I am not suggesting they need to change anything because I actually think they will win playing that way, but it will be fascinating to see if Leicester can prove people wrong yet again.