Head coach Aitor Karanka says there is "no doubt" striker Jordan Rhodes is ready for a first Middlesbrough start after two appearances as a substitute.

Rhodes came off the bench on debut against former club Blackburn and followed that with a goal as a second-half replacement at MK Dons.

The 26-year-old could make his first start at Leeds United on Monday.

"He understands his role and he knows that he's an important player for us," Boro boss Karanka said.

The Teessiders signed Rhodes from Blackburn on transfer deadline day, paying an initial £9m to bring the prolific Scotland international to the Riverside.

"When I sign a player I always want to know what he's like as a lad, I want good people in the changing room," Karanka added.

"I hadn't met him before the first time, but I had a good reference because his uncle is my assistant." 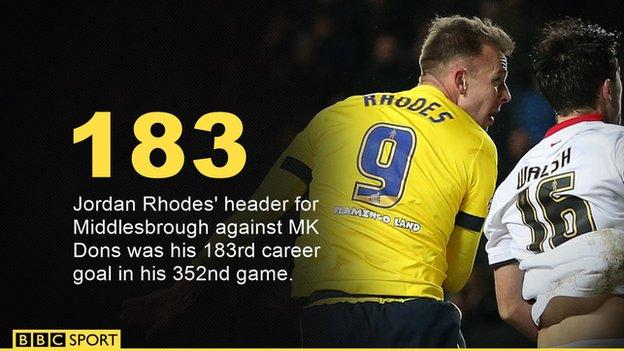 The introduction of Rhodes was crucial at Stadium:MK, as he scored a 93rd-minute equaliser to earn a point, and put Boro back on top of the Championship.

However, they are are now four games without a win following five straight victories over the festive period.

"I think sometimes you lose perspective - after the game against Derby [2-0 win on 2 January] everyone was expecting the Premier League in March or April," Karanka told BBC Look North.

"The last team to be promoted early were Leicester two years ago, and it normally goes down to the last few games.

"I'm confident, we have a better squad than last season, we have time to work and the game against MK Dons I felt the team was better than against Blackburn."