Derby County scored three goals in the last 10 minutes for a dramatic comeback win at Brentford that ended an eight-game winless run in the Championship.

The Rams, who last won in the league on Boxing Day, controlled the first half, but were kept at bay by an inspired display from goalkeeper David Button.

Alan Judge's 20-yard strike gave the hosts the lead against the run of play.

But shots from Jeff Hendrick and Cyrus Christie put the Rams ahead before Chris Martin settled it on the break.

Hendrick forced a fine double save, Darren Bent also saw an effort kept out, and the keeper did brilliantly to stop Johnny Russell's low strike.

Judge's fierce shot seemed set to at least end a run of two defeats for the west Londoners.

But the Rams, buoyed by the introduction of both Martin and Tom Ince as substitutes, piled forward in the latter stages to earn a win that took them up to fifth in the table. 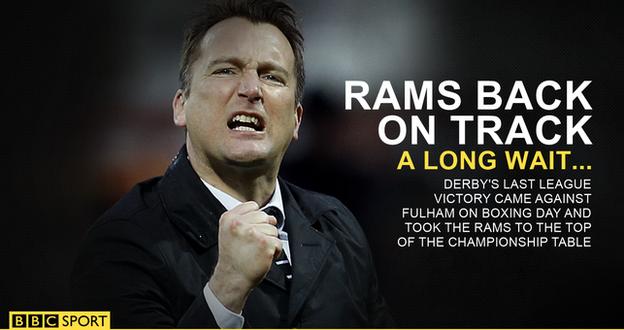 Hendrick scored from a tight angle, Christie struck his first Rams goal in 74 appearances and Martin scored on the counter-attack after Jake Bidwell had an effort cleared off the line at the other end.

"They were more powerful and more aggressive than us and David Button kept us in it.

"The game is decided on fine margins and it could have been 2-2, but they got the third, which for me is academic.

"They got the equaliser, we lost half a yard and they gained half a yard, but we still showed enough character to create a couple of chances after that."

"We were excellent and I thought we created enough to win two or three games.

"We started on the front foot, were aggressive and full of determination and desire, but their keeper was inspired.

"Undeservedly we went behind and it would have been easy to feel sorry for ourselves but it's a testament to the character in that dressing room that they rolled their sleeves up and continued to dominate the game and control it, but also got the equaliser and another two goals."

Have you added News Alerts in the BBC Sport app? Simply head to the My Alerts menu in the app - and don't forget you can also add score alerts for your favourite football team, the Six Nations, and more.