Rashford, who scored twice on his debut against FC Midtjylland on Thursday, steered in a loose ball for the opener then headed in three minutes later.

Danny Welbeck nodded Arsenal back into the game, but Rashford picked out Ander Herrera whose shot was deflected in.

Arsenal - who have not won the title since 2004 - remain in third place, five points adrift of leaders Leicester having now played the same number of matches.

The Red Devils moved back into fifth position with their first win in three league games.

Do Arsenal actually want to win the title?

That's the question posed by former Manchester United and England defender Rio Ferdinand. Of course, Ferdinand is being facetious. And of course Arsenal want to win the title.

But, against an under-strength and youthful home side, the Gunners blew another opportunity to demonstrate their title credentials.

With leaders Leicester snatching a late win on Saturday, and second-placed Tottenham fighting back against Swansea, Arsene Wenger's side lost valuable ground on their title rivals.

And it ended a miserable week for the Frenchman, who saw his side falter in three competitions.

Wenger watched his team labour to an FA Cup draw against Championship side Hull, then put themselves on the brink of a Champions League exit at the hands of Barcelona.

"This is a fight where you keep going even when disappointment is there. Let's show we are prepared for the fight," he said.

Barely anyone outside Old Trafford had heard of Marcus Rashford less than week ago - now the teenage United striker is a household name across the country.

Two goals on his senior debut in the Europa League against Midtjylland catapulted him into the national spotlight.

But, many asked, how would he fare against a league title-chasing side in the heat of a battle between two fierce rivals? Coolly, calmly and clinically, as it turned out.

Rashford showed signs of his youthful exuberance in the early stages, darting inside a pair of Arsenal defenders from the left touchline before being hauled down on the edge of the penalty area.

The opportunity of that set-piece was not taken by the Red Devils, but it mattered little as Rashford soon put them into a two-goal lead.

The young Mancunian pounced on a poor clearance by Arsenal centre-back Gabriel to slot in his first Premier League goal, then waltzed into space to powerfully head in Jesse Lingard's floated cross.

But it was not just his finishing that caught the eye. Rashford showed great awareness and composure to pick out the run of Herrera, whose 20-yard shot took a wicked deflection off Arsenal defender Laurent Koscielny.

No wonder he was given a standing ovation from the Old Trafford crowd when he was replaced in the 80th minute.

Manchester United manager Louis van Gaal fell over in front of the fourth official in what was described as "the comedy moment of the season" by BBC Radio 5 live commentator Conor McNamara.

The Dutchman, who rarely leaves his seat in the dugout during matches, appeared to be frustrated by an alleged dive by Gunners striker Alexis Sanchez.

Grim up north for the Gunners...

Arsenal have not enjoyed their Premier League visits to Old Trafford in recent seasons, failing to pick up three points there since September 2006.

And many felt the Gunners needed to finally win at Old Trafford if they are going to end an even longer barren run - becoming the English champions.

The opportunity to beat United was probably the easiest for Arsenal than any other time during Arsene Wenger's 20-year reign.

But their defensive errors cost them dearly. 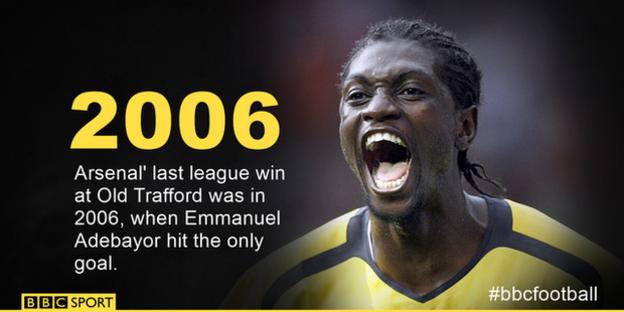 Man of the match - Marcus Rashford

A couple of days rest and then straight back into Premier League action. The top flight reconvenes for a full midweek programme, with both teams facing home matches on Wednesday.

Arsenal look to bounce back against 16th-placed Swansea, while United welcome 10th-placed Watford.