Liverpool warmed up for the Capital One Cup final on Sunday by reaching the last 16 of the Europa League with a tense win over Augsburg at Anfield.

Following a goalless first leg, James Milner scored a penalty after Dominik Kohr's handball to put the Reds ahead.

Liverpool failed to take their chances and a Lucas Leiva back-pass released Augsburg's Caiuby but he shot wide.

An away goal would have put the Germans through and Reds keeper Simon Mignolet had to save from Tobias Werner late on.

Liverpool ended up hanging on as they made it into Friday's draw in which there are no seedings or restrictions on facing teams from your own country.

The Reds would have wanted to put this tie to bed as quickly as possible with the Wembley showpiece against Manchester City on Sunday and they were aided by the early penalty.

Liverpool pressed high up the pitch and played some stylish football but, with six goals in seven previous Europa League outings this season, they again struggled in front of goal and failed to turn their superiority into a bigger lead.

Brazil midfielder Philippe Coutinho had a promising chance when he was set up by the impressive Daniel Sturridge, only to see his stabbed shot from eight yards saved by keeper Marwin Hitz.

England international Sturridge had a shot palmed on to a post after a Coutinho pull-back and the striker also sent a shot just wide when he was not flagged after appearing offside.

The anxiety for the home side increased as the game went on - and Reds captain Jordan Henderson had a close-range shot saved before the relief of the final whistle.

"It is frustrating. We should be scoring two or three and killing the game off and it makes it tough second half as you know if they score they go through," England midfielder Henderson told BT Sport.

"We have to give credit to Augsburg as well. They are a quality team and put us under pressure." 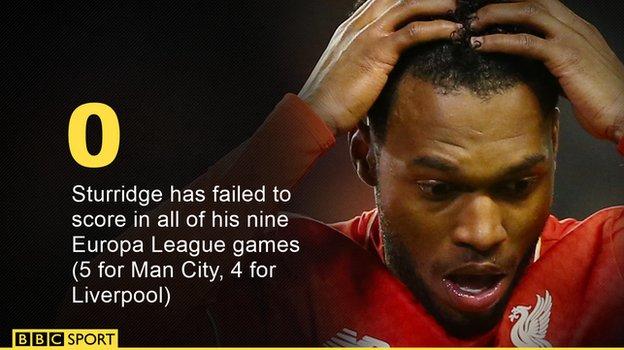 The hosts were the better team but Augsburg, who are 13th in the Bundesliga, had their chances as they almost capitalised on Liverpool's lack of ruthlessness.

Kostas Stafylidis had a well-struck shot parried away by Reds keeper Mignolet and Caiuby missed after Lucas' back-pass.

Mignolet also rescued his side when he quickly came of his line to block a Werrner shot when he had been put clean through on goal.

A late 20-yard free-kick from Stafylidis also curled just the wrong side of the post as the German side's debut season in European competition came to an end.

What shape are the Reds in for Sunday's final?

Liverpool boss Jurgen Klopp chose to play a strong line-up, despite the game being just three days before the trip to Wembley.

Sturridge and Coutinho had only recently returned from hamstring injuries but both played, with the former being taken off after 66 minutes and the Brazilian playmaker being substituted after 80 minutes.

Milner did go down at one point following an accidental clash with Stafylidis, but there did not appear to be any other injury worries for Klopp.

"Phil had one or two situations after challenges but we need to find new faith or trust in the body of the players," said the 48-year-old German.

"They (Sturridge and Coutinho) are very important for us but we need them in their best shape and you can only get this from training and matches."

Man of the match - Daniel Sturridge

Liverpool manager Jurgen Klopp: "It was absolutely deserved. We were the better team, we created chances but we had one problem in that we didn't use them.

"We couldn't control the game in the last 20 minutes and it was hard, that is how it should be, but we are in the next round."

Augsburg coach Markus Weinzierl: "I think we were a little unlucky with the penalty but we kept it going right till the end and that says a lot for our team and I am very proud of the players and the club."

As mentioned, Liverpool are back in action on Sunday as they face Manchester City in the Capital One Cup final as the Premier League rivals compete for the first piece of major silverware of the English domestic season.