If Manuel Pellegrini was offered a choice of the three trophies he can still win this season, the League Cup would be the last one he would take.

But if his Manchester City side beat Liverpool at Wembley on Sunday, he has one in the bank. Lose, and he will be under more pressure with talk that he will leave the club empty-handed in the summer.

Pellegrini has not helped himself much there. His obsession with the Champions League has already ended City's FA Cup hopes - and it could finish off their Premier League title bid too.

I thought Pellegrini's selection for their FA Cup tie against Chelsea at the weekend was utterly ridiculous, but he was able to justify it with his team's 3-1 win over Dynamo Kiev on Wednesday.

That will not be the end of his rotation, though. City have basically put their last-16 tie to bed, but Pellegrini will still want to use his strongest team to nail it down completely so the club reaches the quarter-finals for the first time.

To do that for the second leg against Kiev, he will have to rest players in the league as well.

It is now or never for City in the league

That tie comes in mid-March, between a trip to Norwich and the Manchester derby, and those are the games where he will take risks with his selection. If the Chelsea game is anything to go by, any wholesale changes will cost him.

City have got a great chance of winning a trophy in a one-off game at Wembley on Sunday but in the Premier League it is also case of now or never for them.

Their form has been patchy anyway, so it is hard to make a case for them ending up champions if they are going to prioritise a different competition.

In their position they cannot afford any more slip-ups.

Throughout the season I have always said City will win the Premier League title. Now, I don't think they will.

Consistency the problem, not Pep

City's display against Kiev was their best since the club announced at the start of February that Pep Guardiola will replace Pellegrini in the summer.

It is entirely possible that having under-performed all season, they have finally hit their best form at exactly the right time.

But they have been so inconsistent all season that there is no way you can look at just one win and say they are suddenly back on track.

For the same reason, I don't think you can blame the Guardiola announcement for their defeats by Leicester and Tottenham in the last couple of weeks.

There are times when the City players will be thinking about the managerial situation, of course. On a basic level it comes down to wondering whether the new man will like you or not.

But I remember when I was at Celtic that they announced before the end of the 2004-05 season that Gordon Strachan would be replacing Martin O'Neill as manager, and it did not stop us from winning the Scottish Cup final.

For a player, the fact that you know a new manager will be coming in does not affect your decision-making over what you see and do during a game.

Captain Kompany can make a difference 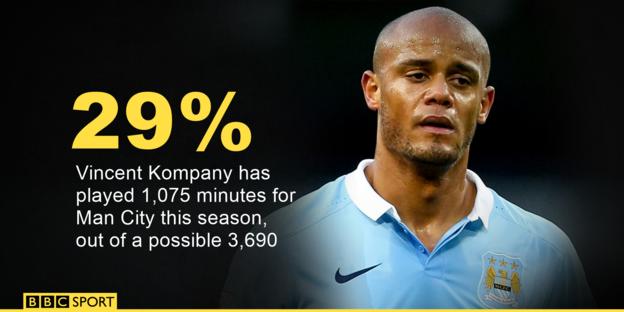 The return of Vincent Kompany, and whether he can stay fit, is likely to prove far more significant for how City's season turns out than the news about who is going to be their next manager.

Kompany, along with Sergio Aguero, David Silva and Yaya Toure, have been City's most reliable and influential outfield players since their first title win in 2012, but they have hardly played together this season.

It will definitely make a big difference if they get a run of games where all four are fully fit and firing on all cylinders.

It is Kompany, the captain, who seems to be missed particularly badly at the back when he is out injured.

On their own, City's stats with and without Kompany show important he is.

But you have to watch them play to see the difference he makes to the confidence of his defensive team-mates, and also how much more assured they appear as a unit.

What will City win this season?

I do understand why Pellegrini is desperate to succeed in the Champions League - he has already won the Premier League and Guardiola has been brought in to succeed in Europe, so this is Pellegrini's chance to leave a bit of egg on the owners' faces.

It is not totally ridiculous to say City can win it this year, either, when you consider the players they have got.

We have seen in previous years that with a little bit of luck anything is possible, even if Barcelona, Bayern Munich and Real Madrid do look like they are a cut above the rest.

I hope City can go all the way to the Champions League final at the San Siro on 28 May, because it would be great to see a British team do well.

But I think their efforts to make it there will work against them in the league, because if they lose two more games then their title hopes are over.

Even in a strange season like this, where the Premier League is so competitive that a team could win the title with fewer than 80 points, it will not be retrievable.